Zzaion is the last lizard stronghold in the south of Zao. It has gates which are not always opened, so you can't always hunt there. There are sometimes raids by Orcs who want to defeat Zzaion. If this happens, the gates are breached and will stay like this until the next Server Save and some Lizard Bosses will spawn to lead the defense against the orcs. You cannot log out in this area to prevent players from getting stuck there when the gates are closed. This raid is triggered by rats that spawn on switches in an underground room which can be seen below. 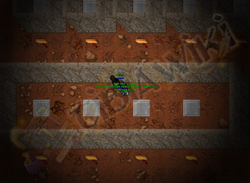 Zzaion Raid triggering room
Add a photo to this gallery

The northern part of Zzaion contains mainly Low Class Lizards, making it comparable with Chor - be mindful of the various orcs that may be roaming around from the raid, though. The central part of Zzaion contains mainly High Class Lizards, making it a nice hunting place for higher levels. The tower in the south is filled with Draken and Lizard Zaoguns.

Retrieved from "https://tibia.fandom.com/wiki/Zzaion?oldid=755814"
Community content is available under CC-BY-SA unless otherwise noted.