The Zao Wailing Widow Cave, is inhabited by Wailing Widows and Lancer Beetles (the prey of Wailing Widows). The entrance can be found east of NPC Curos (the minotaur who is leader of the orcs) and south of Dragonblaze Peaks, a bit middle-north of the Zao Steppe, here: 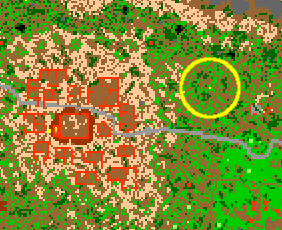 The cave can be hunted by mid-levels, it is comparable to the Ancient Scarab floors of the Larva Caves. There are two main floors that contain both Beetles and Widows, as well as a third-floor quest room (containing 4 Widows) that can only be accessed when on the right quest.
Note: There are spider webs in all the cave, so you must bring a melee weapon or a firebug to destroy it!

This cave has some specific plants which are rarely found elsewhere. This is caused by the spreading corruption in Zao.