TibiaWiki
Register
Don't have an account?
Sign In
Advertisement
in: Plants, Animal Products, Food and Drink, Plants and Herbs, Version 6.0 Implementations,
and 20 more

A rare and nice decoration item. It had been rumored to have spawned somewhere in Ab'dendriel although this was never confirmed.

It could also be acquired due to a certain bug in Venore at one time, since there used to be one on display on a table there (it was removed after Updates/9.8).

Nowdays they are given sometimes as Fansites Contest Prizes.

There are about 100 yellow roses known to exist. 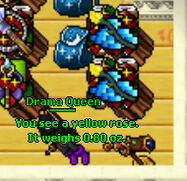