There are only a few wooden key known, one to Fibula dungeon entrance. It can be purchased from Dermot on fibula for 2,000 gp, or from Simon the Beggar, south of the village for 800 gp. The others are the Old Fibula flute room key, and the Master key 0000. Wooden keys tend to break if you use them on the wrong door.

Rumours says it once opened every door in Tibia.

It used to open every door in Tibia. However, that is not the case anymore. Shapeshifter was the owner of this key and many other unique keys. Since Shapeshifter was hacked, his key collection (including key 0000) was lost. Other collectors have tracked down the hacker and bought the key collection to preserve its history and did so successfully. This key was added into the game by one of the map creators (before CipSoft became a big company they used volunteers to do areas). This person added the key into the game in secret. When CipSoft found out that there was a hidden key, they removed its function.
The old master key was wooden (brown) and the new one is magical (purple). 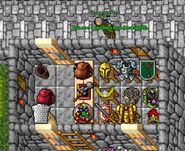 Old master key
Add a photo to this gallery

The Master key Wooden Key 0000 was created by CIP. It serves as best we can gleam to allow CIP members an easy way to access rooms that in all normal circumstances would never be opened. The first version on the game world Antica is a wooden key which after falling into player's hands was quickly deactivated. The most current version is a Magical Key seen on various test servers.

Used to enter/exit the Fibula Dungeon. Comes in wooden and copper variants.

Used to enter/exit the Fibula Dungeon. When buying the key from Simon he will first ask you for some money, continue giving him money, and when you have given him 800 gp he will hand you the key. There is also a copper key with the same number (3940) that works too.

Old Cyclops area in Fibula. This key is no longer in use.

Used to enter/exit the old Cyclops hole east of Mercenary Tower in Fibula. This key is no longer in use. 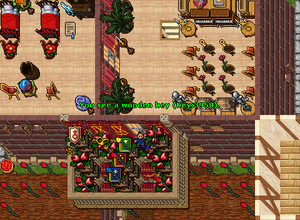 Wooden Key 3950 as seen during Red Rose's 18th Anniversary Party at the Guildhall of the Red Rose.
Add a photo to this gallery

Opened the Flute Room in Fibula. Comes in wooden and bone variants. This key is no longer in use.

Once opened the Flute Room in Fibula Dungeon. A bone version also exists. This key is no longer in use.

Retrieved from "https://tibia.fandom.com/wiki/Wooden_Key?oldid=114121"
Community content is available under CC-BY-SA unless otherwise noted.