The Percht Queen is awakening. Are you brave enough to resist the perishing cold that originates from her chambers and stop it from creating a neverending winter?

On December 22, a small boat will appear near Svargrond's harbour, here. Use it to travel to the Percht Island. 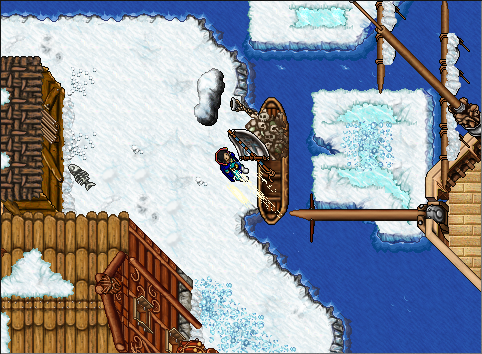 in order the fight The Percht Queen you will need to obtain 3 items :

Soft Hammer. Then, use the hammer on a

Bonny Bunny and it will faint. Use the Stunned Bunny and one of the following messages will appear.

Do it till you succeed, then pick up the 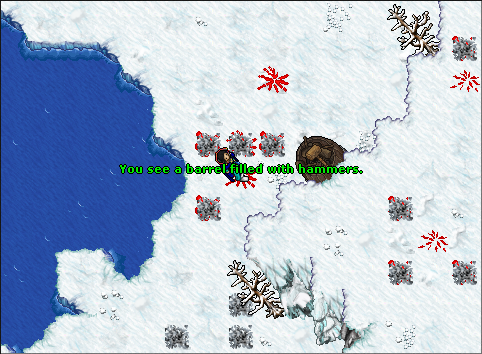 Large Snowball by using one regular Snowball on another one that is on the ground. You can obtain infinite Snowballs from

Snow Heaps around the island. 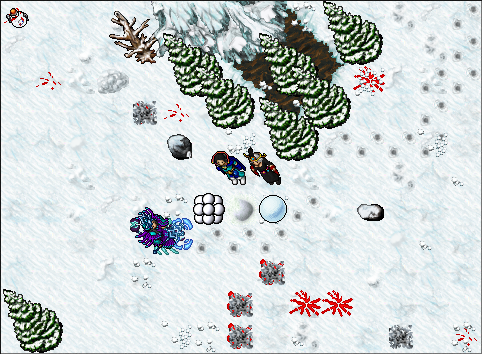 Use the Frozen Carrot on the Large Snowball and an Animated Snowman will spawn. Kill it. You need to do this until you have looted one pair of Twig Arms, and you can only create one

Animated Snowman every 5 minutes and on the Percht Island. If you try to create it before the cooldown is over, you'll get the following message: You're still exhausted from building your previous snowman. If you try to do it somewhere else, you'll get the following message: Nothing happens. Just like taking the frozen carrot, this step may also fail.

Failed: A gust of wind blows your snowman away. Unlucky!
Succeeded: <no message>

Broken Bells and Percht Horns are dropped by Perchts and Schiachs all around the island. Once you have all 3 items, you can head to The Percht Queen throne :

in order to enter the teleport you will need to disguise yourself as a percht, use one of the items you obtained on another, that will fashion a percht disguise. you will get the following message: You managed to create a convincing disguise by combining various remains from the percht. Once disguised, you can enter the teleport and fight The Percht Queen.

Note: The disguise grants you access to the lever room. if you didn't fight the The Percht Queen (succeeded or failed) you do not need a new disguise.

You can fight the queen with up to 5 players, once every 20 hours. The fight is very easy and there is pretty much no danger of dying, a team of players around level 50 should be enough to do it.

In order to defeat the Percht Queen, you must first unfreeze it. To do so, you'll have to do the following steps:

1. As soon as you pull the lever, you'll be in a small room with a Warm Bonfire

and Vortex of Nature

, here. Use the bonfire and a Percht Warding Torch

will appear in front of it, pick it up.

2. Step on the Vortex and your appearance will change to a Leaf Golem.

3. Go down, and then quickly go all the way to the other side of the dungeon, here. Do not go north. When you step near the wall, a Rush Wood (Quest)

(tree) will appear. Use it 5 times, each time a Branch

will appear in front of the tree, pick them all up.

4. Go to the south where there will be a Burn Out Bonfire

, here. If it's not lit, use your torch on it and light it up, so it changes into a Smoldering Bonfire

. Start using the wood on the bonfire.

5. After using all the wood, go back to the west side, transform yourself into the Leaf Golem and repeat this process until the bonfire is so big that it's a Blazing Bonfire

and a Warm Fire

6. When the Warm Fire appears, the bonfire will stop burning, use a torch on it again (the torch only lasts for 40 seconds, so you'll also need to constantly pick up a new one). Then, use the bonfire and you'll start burning yourself

7. Lure the Warm Fire to the north, but be careful because the Percht Minions will try to kill it. Also avoid the Ice beams that come from the north of the room. The Warm Fire will explode and deal damage to The Percht Queen.

Repeat the process above until The Percht Queen is not frozen anymore (required 4 Warm Fires) and can be killed by the players.

Once the Winterlight Solstice ends, all worlds receive a week of increased respawn rates (2x) while mana & health points regenerate twice as fast. Since it's not really possible to "fail" in this event, all game worlds receive this reward.

The Percht Queen has been defeated, rejoice in the majesty of light and let its renewed grace heal your body and soul!

Note that if you have already participated in the event 2 or 3 times you can get the mounts and upgrades during the same event, as long as you deliver one Skull for each mount. The mounts do not replace their previous version which means there are a total of 9 different mounts you can use.