Werebadgers are humans under a curse - others claim infected with a disease - that causes them to transform into savage beasts. At the beginning, the transformation only takes place at full moon and the victim regains its human appearance the next morning. In the course of time, the transformation lasts longer and the full moon is no longer a necessary condition for the transformation. At a certain point, the beast takes over more and more often.

Werebadgers aren't very strong and tough but quick and clever in compensation. They are no real predators, but may nonetheless be a danger to the careless. Their appearance is a mix between a badger and a human being. Like badgers, Werebadgers favour caverns as homesteads.

The curse of the Full Moon, as it is frequently called, is usually spread by the infectious bite or scratch of other were-creatures. Forbidden books also tell about methods that allow to turn somebody into a were-creature with the help of dark rites. Some twisted individuals even call the curse upon themselves in the hope of using their new powers to avenge an injustice or insult. 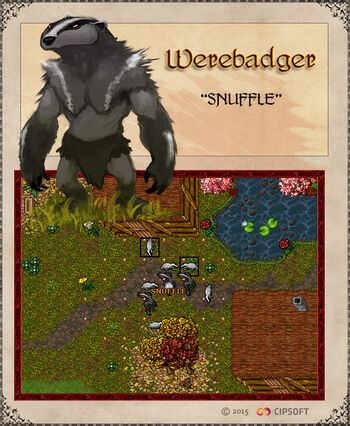 Grimvale: -1 floor from ground level, also seen on surface during full moon (12th-14th of every month). Also in the were-beasts cave south-west of Edron (accessed here) and in the Last Sanctum.

Knight: Try to use your mana as fast as posible when fighting them, as they deplete it pretty quickly. Their melee isn't very strong, but you should be cautious with their waves, specially if you're fighting two at once. If possible, bring Koshei's Ancient Amulet and be ready to cast spells because they become invisible very, very often.

Retrieved from "https://tibia.fandom.com/wiki/Werebadger?oldid=772441"
Community content is available under CC-BY-SA unless otherwise noted.