Orockle is trying to fight against the destructive Hive Born. You can do the following missions for him. You can accept all missions at once, and each mission counts as an action against the Hive Born, required to advance the hive stage. 200 actions in one day (by the entire server) will increase the stage of the hive, where the stronger areas will be accessible. During stage 3, the hive will be open for a week. On the last day of stage 3 the points must be accumulated in order to revert to stage 2, otherwise it goes back to stage 1.

Note: You can ask the Guide NPCs about the Hive world change to find out what stage is active and how many actions have been taken today.

Orockle will give you the items you need for the missions, but if you lose them you will need to buy them from him for 150-200gp each. Alternatively, you could borrow the mission items from someone else, as you don't lose them when turning missions in.

Guide NPCs: The hive is well defended and prepared for war. ...

Orockle will give you a Strange Powder. Travel around the east side of the Hive, search for small hill-like structures and use the powder on any of their antennae to disrupt their communications. 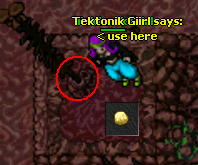 You must use the powder on 8 different antennae.

Orockle will give you a Blob Bomb. Travel to the far eastern side of the Hive and in a small hive pyramid go down 2 floors. Use the Blob Bomb (like a rune or a fishing rod, from a distance) on 7 Floor Blobs. 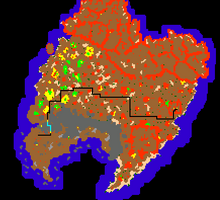 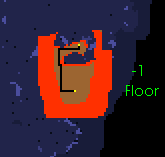 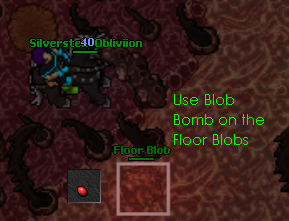 On the surface of the hive, use the swarmer drum. This will summon a Swarmer Hatchling which you should then feed the Flask of Dissolved Chitin to (use the flask on it). Immediately the Hatchling will travel to Orockle who will collect acid from it. Do this until all flasks have been used. You must wait 30 seconds to reuse the drum.

Tip: You are given 8 Flask of Chitin Dissolvers but you are not limited in how many times you can receive Flask of Dissolved Chitin. You can buy a lot of chitin dissolver and dissolve chitin in bulk. In addition, you can use the drum as long as you have the task and haven't poisoned 8 Swarmer Hatchlings. You can ask other players to summon swarmers for you, making it even quicker.

Orockle will give you a Gooey Substance. Travel to the east side of the Hive area and use the Gooey Substance on 7 Hive Pores. They summon three Lesser Swarmers from time to time so beware of being trapped. 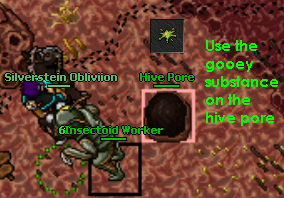 After using Gooey Substance, Lesser Swarmers vanish and the pore changes to Overgrown Hive Pore for 60 seconds before returning. After disabling 7 Hive Pores you will receive a message indicating you are done with the mission. You can disable the same pore 7 times, but it will be quicker to do different pores. 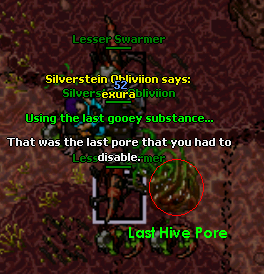 Guide NPCs: The defences of the hive are breached. The hive structure to the east is open ...

The second stage missions are to kill the guards (Kollos Killing) or break the control crystals (Destroy The Hive Crystals). During this stage you can also complete missions from stage 1.

Orockle will give you a Reagent Flask. Travel into the Hive and use the flask on the corpse of a Spidris. You will get a flask of Aggressive Fluid, this fluid last few minutes only (2?). Use it on Insectoid Monolith to destroy it, the monoliths recovers in 5 minutes. You have to refill the flask on another Spidris' corpse and repeat breaking 5 times in total. Note: it is a good idea to have a few Reagent Flasks with you for this mission (either buy them or reuse them from previous times you did the mission). This way you don't have to wait to break a crystal before obtaining another Aggressive Fluid.

Guide NPCs: The hives defences have fallen. Its armies are confused and in shambles. All structures are open for invaders. ...

In this stage you can do missions from 1st and 2nd stages as well as access the reward room which is located on top floor of western Hive structure, going up here. No new missions are available during stage 3.

Doing the missions earns War Exp points and Favour points: the first stage missions are worth 1 point each, and the second stage missions are worth 2 points each. To enter reward rooms you have to buy special pheromone from Orockle (say "reward", "yes") for 50 favour (it will last for one week) which will grant you access to the areas behind Hive Gates, except those guarding the eastern and western towers).

There is 1 Hive Gate on every floor on the eastern structure, and every floor on the western structure. Behind each structure you can find Hive Cells which can each be used weekly to obtain 1 Gooey Mass. This means every week you can get up to 16 Gooey Masses just behind the gates. However, be prepared because there are many enemies waiting for you behind each of the hive gates.

The underground of the western tower is home to the Hive Born Bosses: Chopper, Fleshslicer, Maw, Mindmasher, Rotspit and Shadowstalker. They reside in a strongly guarded room (many Hive Overseers) and each of them have a chance to drop Dung Ball (Quest), which gives 10 War Exp towards the Insectoid Outfits. Note that they give 10 war exp and not 10 favour, so you cannot use it to regain entry without doing tasks.

The Hive Bosses are located here

At any time, you can check your war exp and favour by checking the quest log. You can also check the amount of each task completed this way.

You can get the following achievements by completing any mission:

Retrieved from "https://tibia.fandom.com/wiki/War_Against_the_Hive_Quest?oldid=684063"
Community content is available under CC-BY-SA unless otherwise noted.