This page is about the void. For the tile, see Void (Tile), and for the imbuement see Void Imbuement

In astronomy, voids are the empty spaces between filaments, the largest-scale structures in the universe, even the continent of Tibia.

It can also be described as "A timeless, lifeless plane of nothing located on the edge of creation." There is a broken portal in the Necromant House that instead of going to the Pits of Inferno teleports you to this plane. You will exit the void through another portal that takes you near the SD quest north of Plains of Havoc, here. This void is a nice place to take Screenshots with your friends. To enter there, you must have the Key 3701.

Void can also be found in various other places in Tibia, like the Dreamer's Challenge Quest, in a mission of the The Scatterbrained Sorcerer Quest, the Soul Wells and the Shadow Nexus in the Demon Forge or around the lairs of Fahim the Wise and Merikh the Slaughterer. 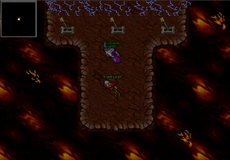 Void under the Plains of Havoc

Void near the Dreamer's Challenge
Add a photo to this gallery
Retrieved from "https://tibia.fandom.com/wiki/Void?oldid=822073"
Community content is available under CC-BY-SA unless otherwise noted.