Venore is a city, which is according to the Isle of the Kings Library: 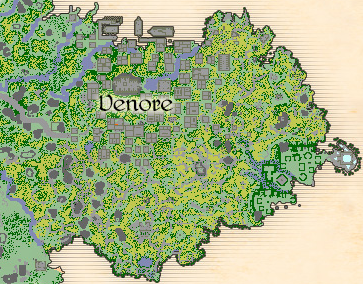 The city of commerce built its wealth on four major factors. One is the free-trade agreement with the Thaian kingdom to which they in theory belong. This ensures trade with all cities, cultures and lands, known or yet to be discovered. Often seen as a separate law but actually part of the free-trade agreement is the gambling license, that is unique in the Thaian Kingdom, because 'commercial' gambling is outlawed since the times of King Yorik I. Another factor is the shipping dock and the woodcutting in the Venore area. Before the Edron colony was established, the Venore area was the major source for wood needed for construction and tools. What seems odd at the first glance, given the swamp area Venore was built in becomes more understandable when considering the next factor: Until the Druids and mages drove away all those poisonous insects and creatures the area was known for its diseases and a criminal colony in the beginning. So the merchants had a steady supply of cheap workers that had to do every job appointed to. The last factor was the discovery of the Spiceweed. A special swamp grass that was soon used by cooks and households all over the continent. Soon enough the merchants became rich and powerful, rivaling most of the Thaian noble families in wealth and power. For now the merchants seemed content with their station and the place Venore takes on the continent and in the kingdom. There are voices that Venore might separate one day or use its influence to wrest even more rights and privileges from the kingdom that becomes more and more dependent on its economical power.

Venore is the only city with 2 depot houses.

Geographical Location: The city of Venore is located here.


To the right is a map of the ground level area of Venore and its surroundings, the city is mostly above ground.

Venore is also a dangerous place for inexperienced wanderers, because near to the west is located the Dragon Lair, more to the south west are the Plains of Havoc, which will be a deadly place for the unnoticed explorer. To the east Elves have an encampment, Shadowthorn. At the north, there is a sunken villa where there seems to be a Knight locked up. North from there we have Amazon Camp, a place with many Amazons, Witches and Valkyries... an excellent place to research on their behavior against strange people. But also in the south are some Swamp Troll Caves where you might even find undead and some rotworms.

*Note: You can mainly (only) find those Orcs in a guarded cave to the north, Beholders are hidden in another cave

Retrieved from "https://tibia.fandom.com/wiki/Venore?oldid=212208"
Community content is available under CC-BY-SA unless otherwise noted.