Over time, his demonic plans yielded fruits. With the help of stolen secrets and enchantments, his dark body is covered with glowing ancient runes that protect him from most harm. He boasts about his invulnerability which actually was proven a lie by the agents of the inquisition. Still, he shakes off most damage with ease, and it would for sure take an insane amount of attackers to bring him down. It was prophesied that no man will beat him - right before he killed the oracle. Still, he fears the Ruthless Seven who defeated him and his allies in the past. Therefore, it is safe to say that, even though he is nearly invulnerable, Hellgorak is all but immortal.

Through the teleport in the Hives in the Inquisition Quest. He is the seventh and final boss.

Fights to the death, retargets rapidly.

He is extremely resistant to all elements players can use. The only way to effectively damage him is to convince the Dreadbeasts which are summoned by the towers around the room. trap Hellgorak with the blocker + 7 dreadbeasts. Druids should use Mass Healing to heal the blocker and the dreadbeasts. 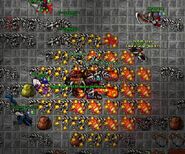 Example on killing tactic
Add a photo to this gallery