Welcome to personal pages of Nienna Telperien, a humble paladin and a part-time user and editor of Tibiawiki pages. I'll write a few words about me, try to explain why I started to play this game, what I like about it and what keeps me going.

A bit hard to remember exact time, but I am pretty sure I started to play Tibia a little over 3 years ago, my first character was created on PvP world back then. Like anyone's first steps without a guide - mine were unsure and thorny I'd say :) I think it was world of Inferna where I first started since PvP sounded more fun, but once I reached to mainland I realized how harsh it was and figured I made a mistake so changed to completely opposite and started to play a non-PvP world. I deleted first few characters as I was "testing" the game, and my first serious character that remains to this day as my oldest one was a Harmonian knight Rezzinthel. This was first character I actively played on, but somehow, along the way I didn't find vocation of knight suiting me so I went on to experiment. So I tried a druid, and kept playing on Harmonia for a bit. I learned pretty much all the basic things about Tibia while playing Harmonia and this server will always remain in my fond memory.

I think I was drawn to Tibia from the start mostly because it reminded me of those good old RPG's (Ultima, Wizardry) I've played like ten years ago. Since I was drawn to learn more about Tibia past - there was only one server to turn to really. So I made a character on Antica, a paladin which by strange set of circumstances became my main character in this game. As I was always fascinated by elven language and their general mythology sparked by the great fantasy writer J. R. R. Tolkien, I wanted to choose elven name and so I made Nienna Telperien - which in elvish means "eternal love" - in remembrance of that special someone I cared for alot in RL.

Since then I've tried a few other worlds with my friends as well but world I'm still playing the most is definitely Antica.

There are many aspects you can get hang up on in this game, which makes it so great and addictive. I've always liked Tibia history and stories about the "old days" so I guess anything connected to it, but my special passion is shield collecting. Maybe shields because I try to develop a melee fighting paladin and also I find them one of the most beautiful items in the game. My collection isn't grand so far since I have only one true rare shield, but I am always trying to loot if possible or obtain the shields from quests. I also have a decent collection of keys (one or two pretty unique) and books, as well as ton of other collectable junk :) 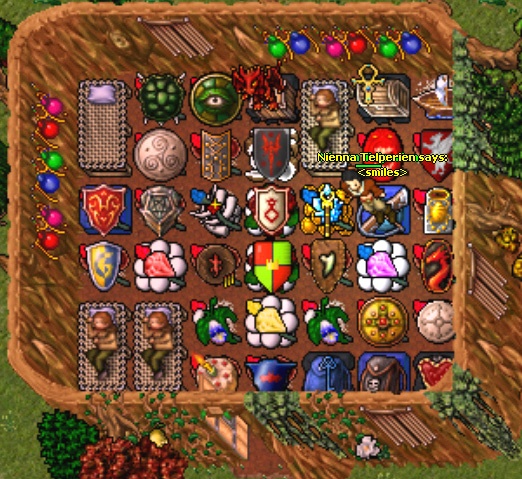 Also another great thing is the amount of people you can meet and chat with in game. I did meet quite a lot nice people, many of them I call my friends. Things I absolutely hate and try avoid are liers and backstabbers and all those people who put their personal pleasure beyond anything no matter how it affects others.

In the end, I love questing, exploring and dealing with mysteries and intriguing places in Tibia which makes the game all the more fun. Without it - it would turn into mechanical stacking of experience day in day out. I hate quest spoiling and making things the easiest way possible, takes a lot fun out of game that way. Though, as my good friend has taught me, there are thing you simply cannot do alone <winks>

The first guild I have joined in Antica (and in Tibia in fact) which stays in dear memory is Bloody Prophecy. It was a close group of friends and my time there was best I had in this game. Sadly, after existing a year it has disbanded due to inactivity, though remaining active members formed a new guild.

I was a member of Satori guild, an old and respected guild on Antica which is unique in all the servers in our duty of guarding city of Ab'dendriel from player killers and troublemakers for the last 5 years. Currently I'm inactive member of a friends-only guild called Angelic Presence

I'm also playing a rook character Darr Dragontear from time to time, whenever I need a good rest from troubles on mainland :) He is a member of fairly new guild Association of Rookgaard. On my other souls I am also a member of Prophecy & Mourngrymn

What else is there to say? I started using Tibiawiki awhile ago and I love the concept of pretty much adding info about all aspects of the game. I added some things here and there, pretty much keeping to basic editing though I'd like I had time enough to learn it more in-depth.

Lately I am not that active much because of my colledge obligations and due to fact that Tibia has become more of a habit than something fun to do. So I am waiting for the day Tibia enchants me again!

Retrieved from "https://tibia.fandom.com/wiki/User:Nienna_Telperien?oldid=121246"
Community content is available under CC-BY-SA unless otherwise noted.