Hunting for silks, 190 silks needed. Also needed 1400 Demonic Essences
I only hunt monster that drop addon items, here is the result of that:

My House Is Shady Rocks 5

Is the best house in svargrond because has the most visible squares to show off decoration. Bid ended at 900k+ right after the svargrond update, people have offer me 1.5kk for it. 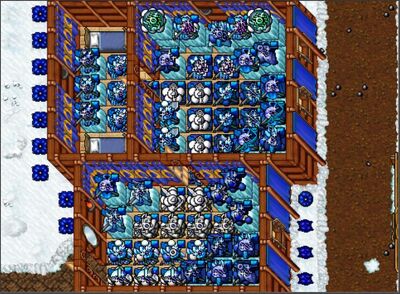 I try to do a house contest with screenshoots and all but not many people joined so I have to return the money and close the thread. You can still see the screenshoots of the people who joined in here.

If I were a Monster

Back Pack of Blueberries. mana

He loves blue items, that weakness can be used to lure trap him and kill him. Keep in mind that he is inmmune to drunkness and that he fights to dead. Is the only known monster that only drop blue items.

Kill him only when he is not using AoL.
You need to be smart to kill this powerful creature.