Introduced small improvements to the NPC trade window as well as account names.

This update was announced along with some website changes. From this point, when creating an account, users would be asked to introduce an account name, compared to before, where an account number would be generated automatically. 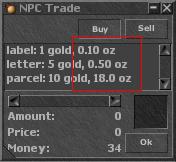 Items that can't be afforded are greyed out.

Option to buy items with backpacks.
Add a photo to this gallery
Retrieved from "https://tibia.fandom.com/wiki/Updates/8.3?oldid=784680"
Community content is available under CC-BY-SA unless otherwise noted.