Several adjustments on all vocations to balance them and resolve their current problems and challenges. 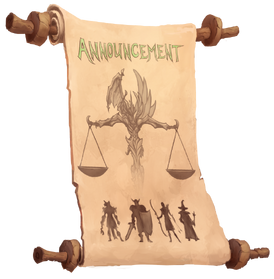 The spell Magic Shield (utamo vita) now only absorbs a limited amount of damage before breaking.

The shield also breaks when you mana pool is depleted. Casting utamo vita while the shield is still active refreshes the amount of damage that can be absorbed. A way to track the active shield amount was added to the UI to help the affected vocations adjust to their new defensive capabilities.

Furthermore, Energy Rings can no longer be used by sorcerers or druids. A new consumable item (Mana Shield Potion) that gives these vocations an option to gain this new Magic Shield without casting it has been added, as well as a new spell (Cancel Magic Shield) that allows players to remove their Magic Shield.

These spells are removed and the corresponding ammunition will become available from NPCs. The arrows and bolts will no longer have an expiration time. The new Paladin spell Divine Dazzle replaces these spells as the vocation's Promotion spell.

Blood Rage now increases all damage the knight receives by 15%. This is in addition to already existing downsides of the spell. To alleviate the reduction in damage dealt by knights, the base damage of the attack spells are increased:

Protector now reduces all damage the knight receives by 15% and no longers prevents the Knight from attacking, but reduces his/hers outgoing damage by 35% for 10 seconds.

Casting Blood Rage or Protector will remove the other spell's effect.

Retrieved from "https://tibia.fandom.com/wiki/Updates/12.55?oldid=823472"
Community content is available under CC-BY-SA unless otherwise noted.