Every Guildhall now has a depot. Guildhalls have had their size and rent adjusted as a result of the change. Each depot chest was placed in a room without a bedroom, and the rooms in question were adjusted to have a depot structure to prevent pushing off a depot tile. Usually this meant the addition of two Counters. CipSoft also removed these tiles from the guildhalls so that they would not be counted for size (and the derived rent), but later realized that this could cause issues and reverted that particular change. Thus, almost all guildhalls had a temporary reduction in rent, with the exception of the two guildhalls that gained size, Castle of Greenshore and Southern Thais Guildhall. After the reversion, most guildhalls ended up with the same rent as they had before the depots were added. The table below contains the before-and-after size and rent as well as the differences. Note that this table is static and will not update to reflect changes since the update.

As a result of the guildhall changes, some guilds lost items hanging on the unreachable walls of guildhalls. This issue was fixed on March 3, 2015, when those items were sent to the inbox of the guild leader. 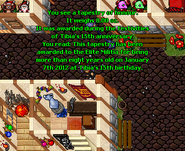 Items that were placed on walls were temporarily lost due to the unfortunate positioning of lockers and counters.
Add a photo to this gallery
Retrieved from "https://tibia.fandom.com/wiki/Updates/10.71?oldid=610841"
Community content is available under CC-BY-SA unless otherwise noted.