Treasure Rooms are unaccessible places in Tibia which contain some exhibited treasures, most players can only dream of. Often a new item can first be seen in a treasure room for a few updates, until it is released as a quest reward or rare monster drop.

This treasure room also serves as the bank of the Adventurers' Guild, and can be found here. The rare treasures include a Solar Axe, The Epiphany, a Gamemaster Doll and a green Dragon Claw. 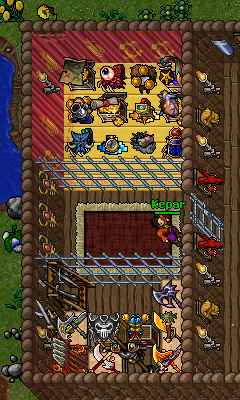 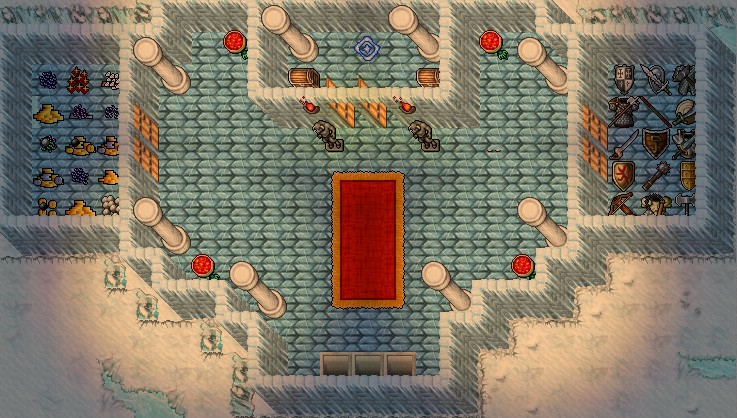 This treasure room is located in the Venore Amazon Camp, here. It contains some rare items, like a Medal of Honour, a Dragon Scale Helmet, Golden Boots, Patched Boots, Bronze Necklace, Holy Falcon and Horned Helmet.

This room is on the top of the central pyramid in Ankrahmun, located here. It contains only one rare item Holy Scarab. 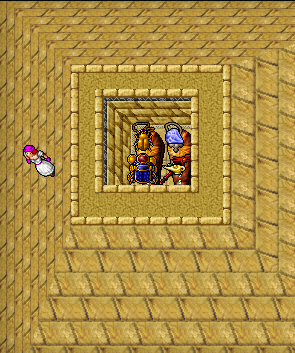 This room near Beregar is guarded by Pythius The Rotten. It contains some rares: Native Armor, Dragon Scale Legs, Winged Helmet, two Golden Helmets, Solar Axe, Dark Trinity Mace, a Hammer of Prophecy under the flash arrow and an Elethriel's Elemental Bow under the north treasure chest. 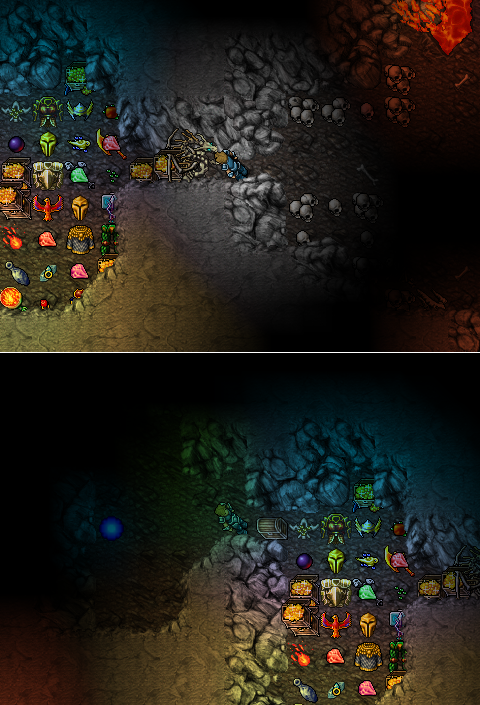 This treasure room is located near Koshei the Deathless' room, here.

This treasure room is located on the third floor of the pyramid, here. You must go through the quest steps up to this point to see it. You can go back and not finish the quest, but if you continue there must be at least two people. 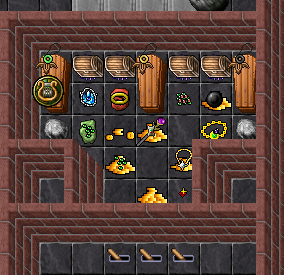 Ferumbras keeps his treasure in his citadel on the third floor. 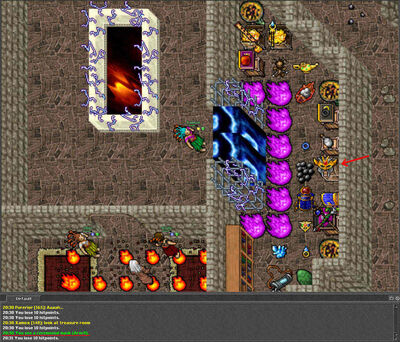 Travel through Hellgate and go to the exit north of Redbone Castle and levitate or use parcels up the walls. At the top go right to find the Hellgate treasure room. The treasure room is filled with 2-3 Ghouls and 3-4 Demon Skeletons and is located here. Go back left to exit outside Ab'Dendriel, here. 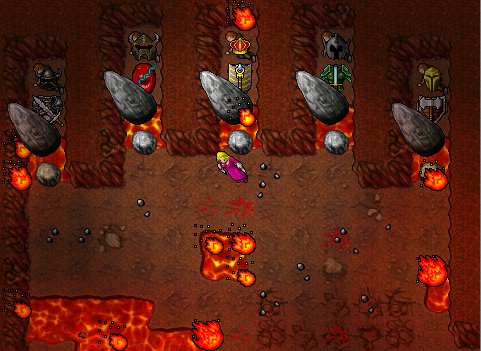 Below the Isle of the Kings there are some catacombs. In those catacombs treasure are buried together with the people. Some remarkable rooms are found, like the room of a former captain, a musician etc. Some of those rooms contain real treasures like a Crown: 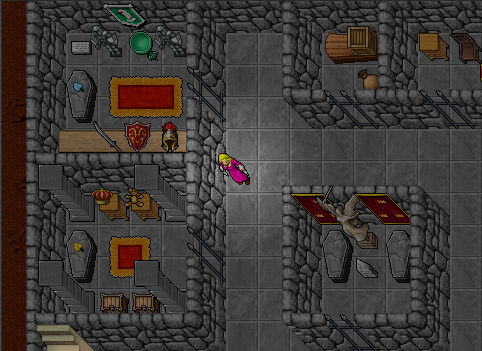 This is the treasure room behind Emperor Kruzak in Kazordoon. You can see many treasures including a Crown and some Dragon Scale Legs inside. It is guarded by a locked door (Key 3801) and several Dwarf Guards. In the room before it, there are many switches on the ground, but nobody knows how to open it. 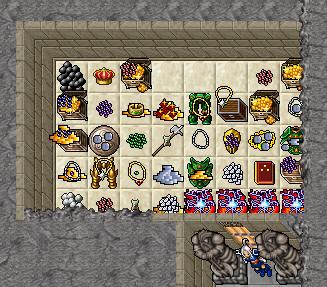 When walking in the Maze of Lost Souls you can see a small (unaccessible) cave from the path, full with treasures. It is located here. 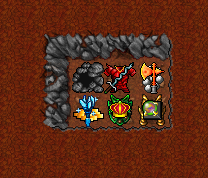 The tomb room of Morguthis is surrounded by his treasures. 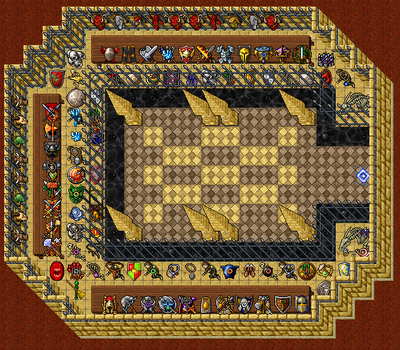 There are (at least) two treasure rooms on Nargor. The first can be found here. You can see some gps, 3 platinum coins, 3 scarab coins and an emerald bangle. 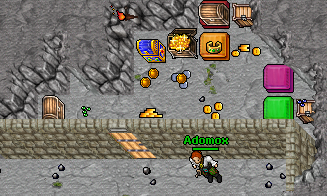 The second treasure room can only be reached when having Raymond Striker's task to kill a pirate boss, and is located here. It contains 4 Treasure Chests, an Elven Brooch, a Violet Gem, 27 Tusks, Pictures, a Silver Brooch, a Holy Scarab, some gold and platinum coins and jewels. 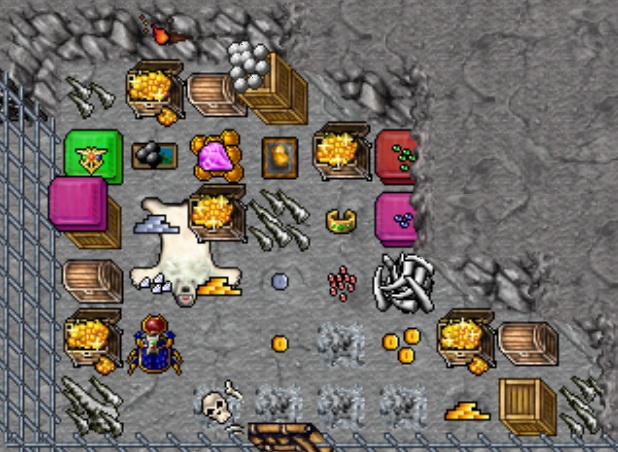 It's located in the same room like one mission of the Explorer Society Quest. You can see an Ancient Tiara, a Might Ring, a Ring of the Sky and some gold.

Omruc keeps a vault of treasures safely guarded behind his trademark red sparkle walls. Notable treasures are a Crown, a Holy Scarab, Some Golden Fruits and several Gold Nuggets. 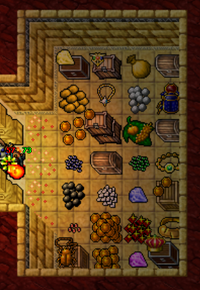 This treasure can be seen in the same location as the quest reward.

This treasure room can only be seen from the Rathleton depot and contains mostly gold in all shapes and sizes. However, items like the Holy Falcon and the unique Keys 0001 can also be seen here.

This is a small treasure room, but has one very rare item: a Ball Gown. It is located here. 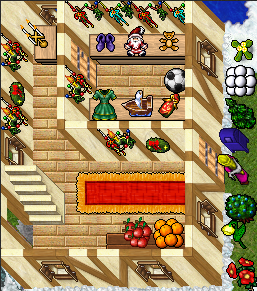 This treasure room is located in Ankrahmun. it contains many strange items: a Blood Orb, Carrot of Doom, Ring of Wishes, Horn of Sundering, Boots of Waterwalking, Blessed Ankh, Djinn's Lamp and a Portable Hole that appears to be an object. 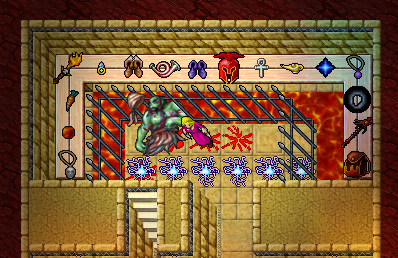 In the Magician Quarter, near the NPC Tamoril. 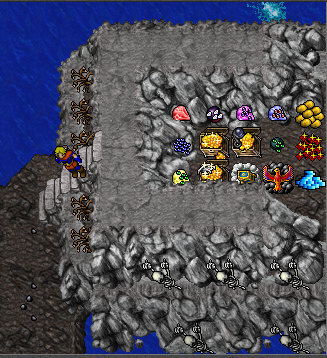 It's located in the palace of Zulazza the Corruptor in the city of Zzaion, south east of Farmine, which is only accessible during orc attacks. 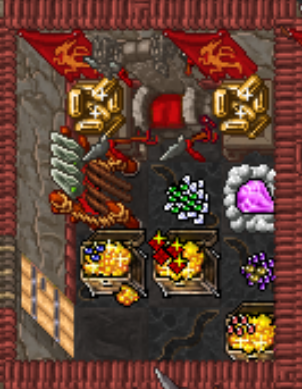 Retrieved from "https://tibia.fandom.com/wiki/Treasure_Rooms?oldid=754477"
Community content is available under CC-BY-SA unless otherwise noted.