Titania was merged along with Lunara and Nova into a new world Iona on November 10, 2014.

On November 10, 2014, Titania was merged with the servers Nova and Lunara into the server Iona. Its creation was officially announced here.

- PvP without being member of one of the leading guilds is almost impossible because you will most likely be killed by these guilds a few minutes after taking a skull.

- Botting takes over, the leading guilds claim to "own" the most good huntplaces and use them to bot 24/7. Entering without their permission will probably lead to an unfair death.

- Payments, that you might have to pay after messing with certain people, will not be acknowledged as "paid" even if you did pay. 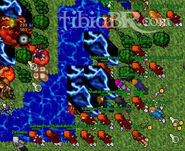 Guild: {{guild|Examination|Examination in Violation}}. Pits of Inferno (2006.30.04)
Add a photo to this gallery

Retrieved from "https://tibia.fandom.com/wiki/Titania?oldid=717646"
Community content is available under CC-BY-SA unless otherwise noted.