Tibiadrome is an arena implemented with Summer Update 2021 that was created to replace Monster Arena. There you can prove your combat skills in fights against creatures which get progressively harder. It was first presented to players through a Dev Note on February 10, 2021. 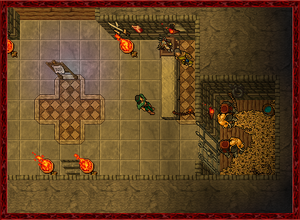 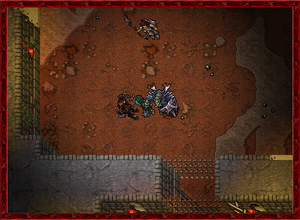 There are five Tibiadrome areas. Their entrances are near the Duelling Arenas:

The difficulty of a fight in the Tibiadrome scales via two factors: group size and current wave level. The more players participate in the fight, the more creatures spawn in a wave, and the higher the wave level, the stronger the creatures are. A maximum of five players can enter the arena at the same time, and at least level 50 is required for each participant. The monsters which spawn are unique to the Tibiadrome, and each represents one gameplay archetype. Each wave lasts a maximum of 120 seconds, in which all the monsters have to be killed to advance to the next wave.

Since the Tibiadrome is a special environment, certain rules outside of it do not apply here. There is no death penalty, and mana, health and spirit potions, as well as runes, bolts, and arrows will not be consumed when used. There is no stamina drain and skill or level progression inside the Tibiadrome, and spells which cost soul points are deactivated.

Once someone has left a Tibiadrome fight, there is a 60-minute cooldown to re-enter it.

Between each combat round (lasting a maximum of 120 seconds), a 8 second preparation phase takes place. The amount of players determines the amount of monsters in each round:

Note that you can only go with players in your Party Experience Share range. This is to prevent high level characters from "carrying" lower level characters to high ranks for easy Drome points farming.

Creatures in Tibiadrome will progressively get stronger and have a bigger health pool as you advance through waves. Their health points are determine by the following formula:

These creatures are randomly selected out of a pool of five different monsters that each have a distinct combat role. The monsters are:

There are a number of combat modifiers which trigger certain effects, thus raising the difficulty of the encounters and creating an additional challenge. At the beginning of a rotation, which lasts two weeks, two modifiers are randomly selected which are the same across all game worlds and are active in all waves during this period. Below are listed all possible modifiers:

Players who have beaten at least one wave in the rotation will receive 10 * dromeLevel drome points after the rotation ends. Drome points can be exchanged for the following decorative items, cosmetics, and mount.

Moreover, the players ranking among the top 20 in the leaderboards receive a certain amount of randomly selected new potions after a rotation, depending on how well they fared. The distribution works as follows:

In case of a tie, the tiebreaker will be the XP that the characters had at the time of reaching the highest drome level, with having lower XP being better.

Additionally, a number of potions, represented by 20% of the remaining participants up to a maximum of 50, will be raffled among themselves. The chances of winning a potion this way are based on the participant's drome level. The higher the drome level is in comparison to their competitors, the higher the chance to win. These potions either have a onetime effect or last 1 hour, and each has their own individual cooldown of 24 hours. They are:

Those who have made the top 5 in a rotation will also receive a temporary Character Title which will last until the next rotation ends.

Current and Next Rotation Info

With the exception of the first Tibiadrome's rotation, which started on a Monday, all rotations start (and end) at the Server Save of every other Wednesday. Note that the starting (and ending) day of a rotation is not affected by Server Resets. The table below shows the current rotation, how long ago it started, and how long left for the new rotation to begin.

Click here to purge the cache and update the time values.
Community content is available under CC-BY-SA unless otherwise noted.
Advertisement