The Stand-Alone Tibia 10 Client is one of three Tibia Clients, the others being the Flash Client and Tibia 11. This client was written in C++ and can be downloaded from the download section on www.tibia.com. It is then installed and run on your computer. It uses the icon

On April 11, 2017 CipSoft announced that this client was now considered outdated and unsupported, reinforcing the suggestion that all players should use the Tibia 11 client. The Tibia 10 client was discontinued on October 26, 2017. 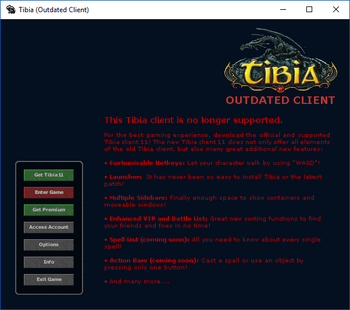 For a long time the Tibia 10 client was the only client available to players, and hence it was simply called "the client". After the introduction of the Flash Client CipSoft and players started calling this client "C++" (the programming language used on it) and "Stand-Alone" (as opposed to browser-dependent). When the new stand-alone client was released, a new naming convention became necessary. Since this released marked the version change from 10 to 11, these same numbers were used on the old and new clients, respectively. Thus, the names Tibia 10 and Tibia 11 were born, despite the fact that the Tibia 10 client was released along the version 7.0 update.

The screen of Tibia client, when connected to the server, is divided into several parts:

Sometimes, when needed, a dialog window appears in the Game Window area.

The Tibia client is available for Linux and Windows. Depending on what you are using, the requirements are:

The map files are by far the most data, and their size grows as you explore the map.

The Tibia 10 client was available on GNU/Linux, a Unix-like computer operating system.

Test-servers were an exception to this, for which a Linux-build would no longer be provided (several years after the above).

On April 11, 2017 CipSoft announced that the Tibia 10 Linux client would be discontinued in favor of the Tibia 11 Linux client. The installation and execution instructions below are kept as a register but are likely outdated and not valid for Tibia 11.

The native client can be downloaded from the official download page. There is no installer, but a compressed tar-archive which holds the files for the client. This needs to be uncompressed using one's favourite GUI-tool, or for example the tar command-line tool:

Replace the wild-card (*) with the exact version number if the directory contains more than one such archive.

Simply double-clicking the executable will in most cases not work, for the working directory needs to be the root of the Tibia-client:

Then run the executable:

To create a launcher for Tibia, something like this could be used to change the working directory first, and when successful, run the client:

Additionally, one may want to set the path for the map-files and friends:

Running the client from a terminal will also make it easy to see any possible error messages. If the client refuses to start, depending on the error message, one can try running the shell-script instead (StartTibia.sh), which is provided by the same archive. This will use the libs shipped with Tibia, instead of the system-provided ones.

On a 64-bit operating system, if the 32-bit libs are missing, an error message like this can be encountered:

This means one should look for the following packages via their package manager:

The name of the package that includes these libraries varies across distributions. There may also be meta-packages that has these, which means they have more than just them, but it may be a good idea to pull those in as well for other purposes. For example, distributions derived from Debian, such as Ubuntu and Linux Mint, have the ia32-libs package. On Gentoo Linux, there is the app-emulation/emul-linux-x86-opengl package, and media-libs/glu when built with ABI_X86="32 64".

Using Wine, it's possible to run the Windows version of Tibia on several Unix-like operating systems.

It is recommended to install Wine via the package manager, but it can also be built from source and used from the source-tree without installing it. See the Wine download page, Wine user guide, and Chapter 2 (Getting Wine) for more details.

To run Tibia with Wine, the Windows client can be copied from a Windows install, or installed as it normally would be by downloading the installer from the official download page. After downloading the client, it's possible to simply double-click the installer (depending on the Window Manager/Desktop Environment), but it's recommended to use a terminal window and cd to the path where the installer lies, then simply run it with Wine:

If the path contains several tibia*.exe files, replace the wild-card (*) with the exact name of the executable (unless of course running all of them is a desirable outcome).

After installing, one may want to create a launcher that changes the working directory to wherever Tibia was installed to, and then runs it as long as the cd command was successful:

The path for map-files etc. can be also set:

Tibia, or any other application that doesn't absolutely require it (Tibia and Wine definitely do not), should never be run as the root user. In case one is unable to run an application as the regular user, it's more than likely an issue related to groups.

Retrieved from "https://tibia.fandom.com/wiki/Tibia_10?oldid=788473"
Community content is available under CC-BY-SA unless otherwise noted.