Tibia is the name of the largest landmass in the game Tibia. It is commonly called "the continent", "Mainland Tibia", "the mainland", or simply "main". Tibia is accessible to every free account player who has mastered Rookgaard and been sent there by either The Oracle or The Gatekeeper. According to Tibian history, it was the home to the first human settlements. As the human race grew wider, further island were inhabitated by those. 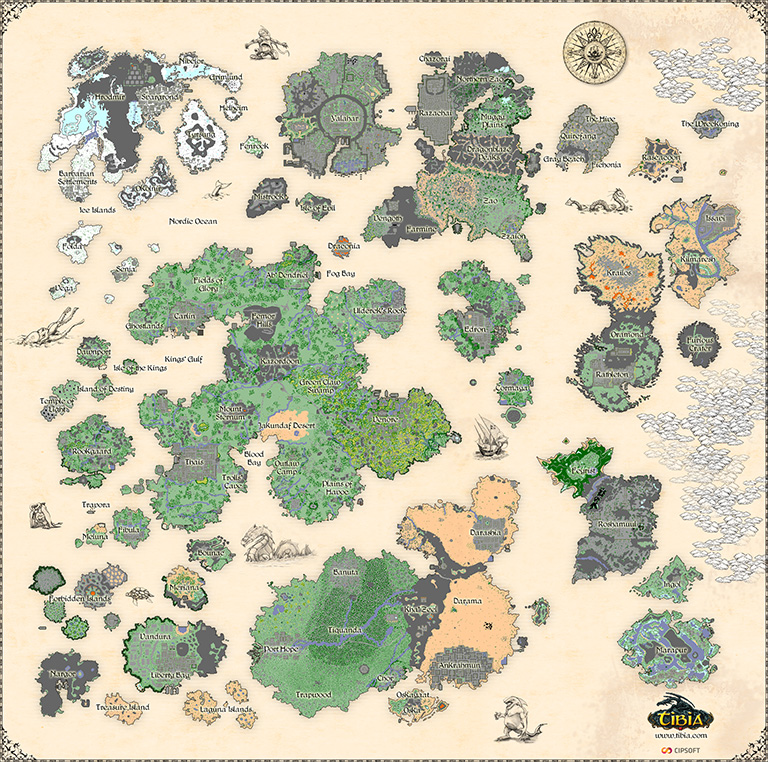 Ab'Dendriel is the northern city of the elves, and is a Thaian colony. Being located in the elvish woods, that town is fresh and beautiful. Also, deep beneath this city is located the Hellgate, a dangerous complex of caves which holds many Tibian quests and secrets.

Carlin is a city out of Thaian domain, which is ruled by Queen Eloise together with her female warriors. There, females have founded a peaceful and romantic place to dwell. Close to Carlin are the cursed Ghostlands, and the Fields of Glory which once where the scenery of a cruel war between humans and orcs.

Kazordoon is the city of the dwarves, hidden literally inside The Big Old One. This city has an awesome architeture design, and leads entrance to the dangerous dwarven prison Dwacatra.

Thais is the first human settlement in Tibia, and is from where King Tibianus III rules the land. This city grew big, becoming a quite confusing place for first-visit wanderers. However, it's the head of all Thaian Kingdom, and the most important city in Tibia.

Venore is a recent city, that is based on commerce. Situated at the very center of the swamp, it's all built on higher floors. Venore is quite big, despite its young age and is the closest town to the challenging Plains of Havoc.

Around the main continent, some other islands have been found, but yet with no town on those. They are basically places where to hunt, and can be accessed by every free account character.

Fibula is an island located southwest of the continent. There is a peaceful small village on the ground level, and many deep caves underground. bula

The Ice Islands are the icy island located northwest of the continent. Being located on a very cold place of Tibia, it's always covered with white snow. The creatures that live here are adapted to its low-temperature conditions. There are three islands which can be accessed with the help of the Nordic Tibia Ferry.

Folda is the biggest island between the icy ones, and despite its low temperature, hides great heat deep inside. There is no building on this island, but its caves are the deepest of the three islands'.

Senja is the island that holds a small village. Apart from the interesting Senja castle located northeast of it, it hasn't anything interesting to be seen.

Vega is the smallest of the ice islands, and also doesn't have any vilage located on it. However, the Santa Claus is said to live on this island, only leaving his house at Christmas time.

The Isle of the Kings is a tiny island where some monks have made their habitation. It's said to hold quite an amusing library. Many secrets lie on this remote place.

There is an island, to the west of the continent, named Rookgaard, There lies the soulvortex, a place where new souls are born into Tibia world. The small village there has the same name of the isle. In this island, Players cannot attack each other, and only players who ahve reached minimal level 8 can talk to The Oracle (or The Gatekeeper for premium charaters) to go to Tibialand.

Yet there are some other islands which are only avaliable to premium account characters. These island are considered separate from the Tibian mainland, and can only be accessed via boat or magic carpet. These islands also hold cities, which only premium players can become citizens of.

Edron is the island northeast of the continent. It's a place that hols many magical secrets. The city located in this island is also named Edron. The deep caves that there are in this island are a must to any experienced player.

Edron is the city on the island with that same name. It's basically formed of a huge fotress and the neraby buildings. Edron is a Thaian Colony, and the magic academy there is the pioner on further spell research.

Cormaya is an island next to Edron, wit ha small village on it. There isn't much to do on this island, but the captain there can take you to Sage Eremo, who can teach you further spells when you get your promotion.

The sea around Darama is rumoured to be haunted by a Ghostship, and that'ld probably be the reason why Thaians fear sailing nearby the east of it. Even though, Captain Fearless will still have courage to take you to the cities located east

Darama has a extreme variability of weather conditions. To the west side, the humid wind that comes from the continent created the astonishing rainforest of [Tiquanda]]. On the east side, humidity is blocked by the Kha'Zeel mountains, and therefore creating a very dry, sandy place. It is the biggest island of Tibia, and has not less not more than three major cities located on it.

Darashia is the town of the desert pilgrims at the northeast division of Darama. Its inhabitant follow local desert costumes, and fear the undead ruins of Drefia the most.

Ankrahmun is a city based on death. It's known for its pyramids made of sand bricks. It's a huge city, also not controled by the Thaian Kingdom, and is home to many underground secrets.

Its tombs are pointed to holds great treasurs, also guarded by great beasts. It seems that no one has ever managed to visit every part of its neverending underground.

Port Hope is a town of the Thaian Kingdom located on the humid rainforest side of Darama. Its buildings are mostly made of forest materials, specially wood. Creatures rule on the rest of the forest, where there are many beast dwelings, such as Banuta or Chor. The colourful ambient is both refreshing and romantic. In this city is located the Explorer Society base.

The Shattered Isles are a group of small islands located southwest of the continent. It's a place of surounding misteries, from Pirates to a strange kind of Voodoo Cult. There is one major city to these islands, Vandura to be more precise. There, the Thaian buildings stand for the highest wealth can own, while the former local inhabitants live in poor conditions.

Liberty Bay is the major city in the Shattered Isles. Thaian coloners have made their rich habitation there, breaking the once peaceful atmosphere of this town. Many secrets roam this city and the other islands, making this place intereting to have a look at.

Retrieved from "https://tibia.fandom.com/wiki/Tibia_(Continent)?oldid=54360"
Community content is available under CC-BY-SA unless otherwise noted.