The Lightbearer was released in 2009, being one Tibia's first World Quests. Due to the innovation it was at the time, it was actually tested twice before going live. Furthermore, on its first year the rewards were very different and not very appealing. You can read more about the changes over the years here.

The quest may appear to be simple for those reading about it for the first time, but more than 10 years of Lightbearer has shown us that you can't succeed with a minimal organization by the Game World community. After all this time, we found ourselves asking how has the Tibia community performed over the years. What worlds have been most successful? What worlds have the worst history?

TibiaWiki has dug up the results of all Lightbearer events since 2010 to try and answer these and other questions. Unfortunately, the only information available regarding the results of the first year are the winners, but we don't know how many days the other worlds lasted, so this year is not considered on this analysis.

We can start by taking an overall look at the combined results per year. As we can see on the chart below, The Lightbearer has always been a challenge. Not once the average days burning (i.e. the sum of how many days each world completed divided by the number of worlds) has reached 3 days. The average is actually very close to 2 days (precisely, 2.18 days), half of the event duration. 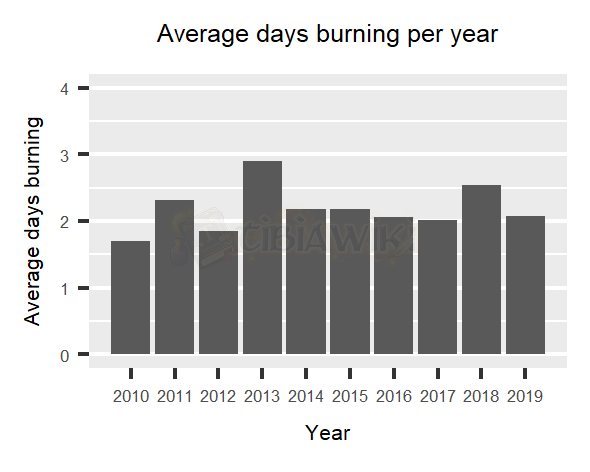 But the truth is, this average doesn't represent most worlds very well. The factors that determine whether or not a world will succeed on The Lightbearer are known to most players: Game World type, number of active players, whether or not the world is at war and, of course, organization. If you look at the same numbers from above but split by Game World Type, something we already know is clearly confirmed: Optional PvP worlds have a much better performance. 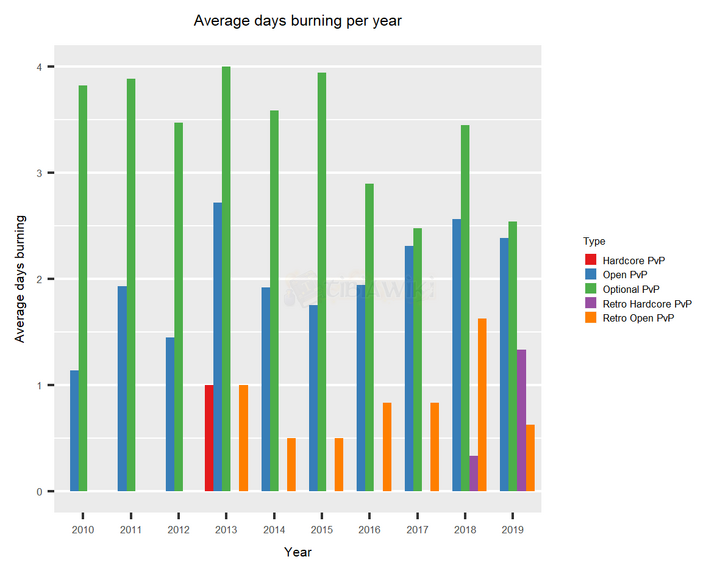 Interestingly, if we check the performance by Game World location we notice that there's no pattern. Even though the difference between locations has been considerable in some years, all 3 locations have had good and bad years, so to speak. 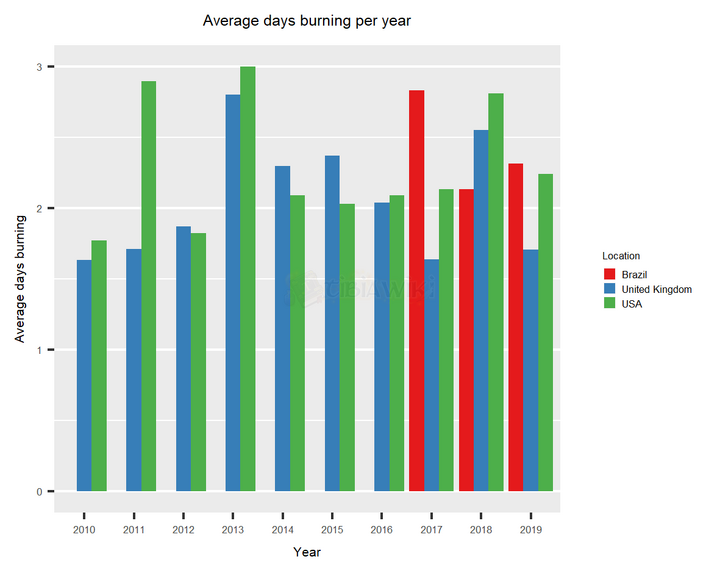 But enough with this summarized data, and let's look at the results world by world. For how many days has each server been able to keep the 10 basins burning? 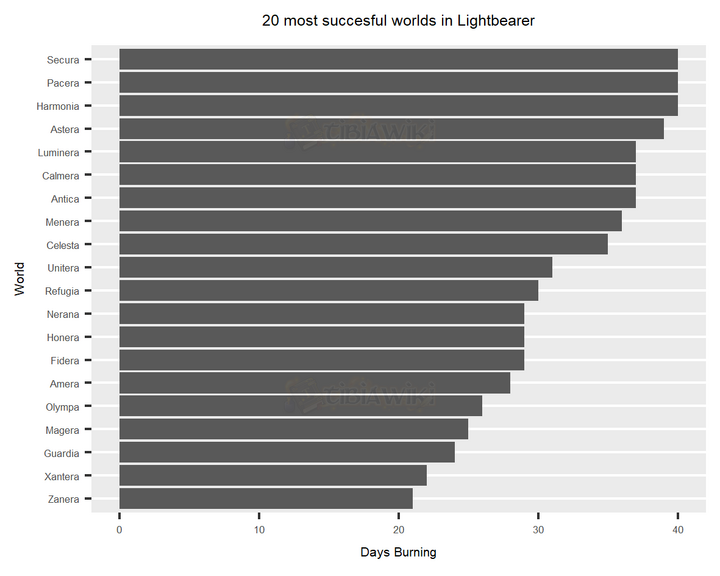 You may have noticed some worlds missing on the plot above, as well as worlds that don't exist anymore. Due to Game World Merges, analyzing these numbers simply looking at the names of the world on the results list doesn't represent well the effort some communities have had. To work around that, what we can do is take the worlds that exist today, and consider the history of the worlds that were created from a merge. So in order to have data for Nefera for all 10 years, we'll consider the results of Honera and Unitera up to 2017. Mathematically, we can do that in two ways: use the best result of each year or the average: 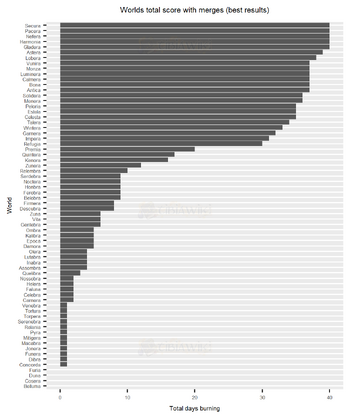 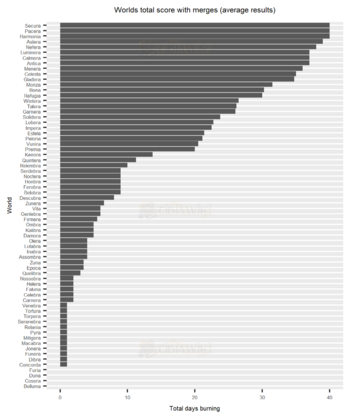 As it can be seen, taking the best results from each year considerably skews the performance of many worlds. Using this method, both Nefera and Gladera (Fidera + Magera + Veludera) have a perfect score, but their origin worlds didn't, so they fall off the rank when the average results is considered. For example, in 2015 Unitera failed on the last day, and in 2017 Honera failed on the second day. These results cancel each other when considering the new world's best history, but not when taking the average. Interestingly, the three worlds that still keep a perfect score are the ones that were never merged - two factors which may be signs of strong and active communities.

A second issue that comes up with world to world comparison are brand new worlds. Despite the dozens of merges over the years, we also had new worlds that launched and never merged with an old world - specially since the implementation of BattlEye. These Game Worlds will never be able to compete with old worlds in total score due to being much younger, but to factor that in we can take a look at the average performance of each world over the years it has existed. 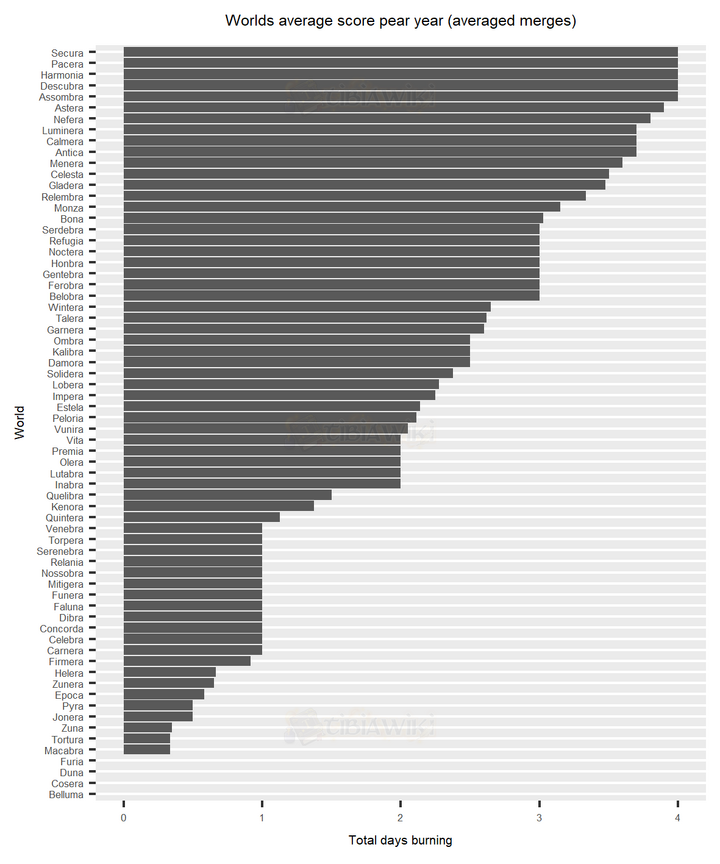 This analysis favors two worlds specially: Descubra (2 years) and Assombra, which succeeded in its first year this time despite being Retro Hardcore PvP.

Last, but not least, we can look at each world's best result ever. In fact, since most worlds have succeeded at least once in the event, what we're looking at are the worlds with the worst results: those which never completed Lightbearer. 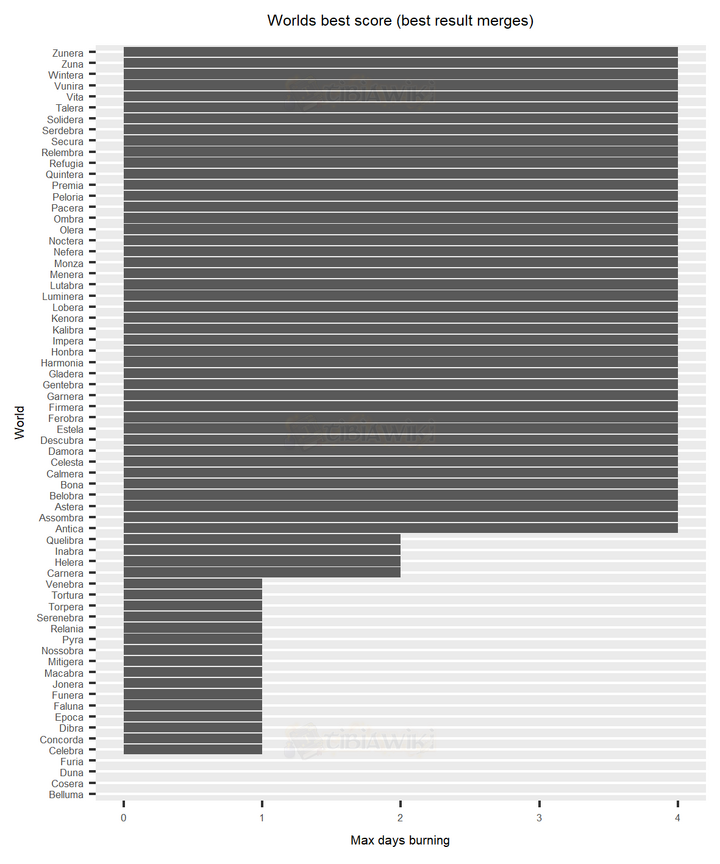 All of the worlds that never succeeded once are actually worlds created very recently over the last 2 years. On one side, one can argue that they didn't have many opportunities to succeed. On the other hand, it's known that the population of these worlds rapidly decreased shortly after they were launched, and apparently they haven't been successful in maintaining an active and organized community.

After seeing all these numbers, some things we already suspected are confirmed. Optional PvP worlds have the best record, which makes sense since players of these worlds are more interested in the peaceful aspects of community rather than on the combat ones. Of course, even in PvP worlds with a strong community, the very own PvP mechanics (such as blocking entrance to dungeons) are used to sabotage the event, and if a small group of organized players succeeds in blocking one Basin for 2 hours, they can force the game world to fail. Furthermore, older worlds generally have better results, and that's most likely related to the fact that over the years these players built a strong community, which also enabled them to avoid the polemic Game World Merges. Very young worlds appear on both extremes, which makes it hard to draw conclusions without understanding each world's unique situation.

That's it for this analysis! If you wish to leave a comment or ask a question, feel free to use the talk page of this article or reach us in TibiaWiki's Discord Server.

Retrieved from "https://tibia.fandom.com/wiki/TibiaWiki:Ten_years_of_The_Lightbearer_results_in_graphs?oldid=777937"
Community content is available under CC-BY-SA unless otherwise noted.