Hello Tibians! Today we would like to tell you about some of the things we have been working on for the past few weeks. New website look with more space for content, new ways of displaying information and other improvements. Let's dive into it!

As you probably noticed, TibiaWiki has a new look. Over the past few weeks, we have been migrating over this new website layout you are seeing, and now it is finally available to the general public as our default skin.

The new skin is not a complete overhaul, and most things remain the same. The way you use and navigate TibiaWiki will not change, but there are several improvements, both for users but also for us admins and other editors.

Probably one of the most significant improvements is that you can now increase the page width by clicking on the "Expand" button on the top-left corner of the page, the one that looks like the corners of a square (⛶). This will make the content occupy all space available in your window.

Another similar improvement to the user experience is the possibility of hiding the sidebar. To do that, you just need to click on the ">" button on its top-right corner. Hiding the sidebar also adds a lot of space for the content to be seen better. This option, however, is only available to registered users.

We really recommend creating a Fandom account[1], as it will make your experience while browsing TibiaWiki better in many ways. Creating an account is quite simple, all you need is an email address or a Facebook, Google or Twitch account. And since this process is completely handled by Fandom, your account information, such as your email address, is not available to anyone, not even to TibiaWiki admins.

Logged in users also have other benefits. For starters, you can set the two options we just presented above to a default: view the page expanded or not, show or hide the sidebar. There are also several other things to customize, but one that is also helpful is the one that allows you to see less ads. 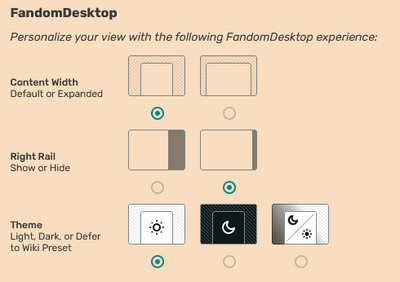 Finally, the last big improvement with the new skin is the Dark theme. For those who prefer less white and darker websites for browsing and reading, you can enjoy that in TibiaWiki now! The Dark theme is also available to registered users and can be used as your default theme.

That is not all we have to announce, however! With the new skin excitement, we also got to work on several other things to make TibiaWiki better.

One of the things we always wanted to do was create a way to represent some game mechanics, like spells, on TibiaWiki. Another thing we also wanted to do for a long time was to improve how we show information from creatures' and bosses' abilities. Now we have a method to do both! Thanks to a lot of hard work from our Administrators, we can now emulate several different scenes on TibiaWiki. For example, a Demon using a unique Cake Explosion:

No, that is not supposed to make sense. We just wanted to show what we can do. Using this, we have started to add visual representations of abilities to creatures. Have you ever noticed how large Gaz'haragoth's doom spell is?

Now, when you open a creature page and its abilities are underlined, you can hover your mouse to view how that ability looks like. You can try it out right here:

Not only that, but as you can see we also added icons of the ability elements so you can see, at a glance, what you're dealing with. We have also used this strategy to improve how we show the Max Damage creatures can deal, separating it by elements.

We do have to say that we are only beginning with this. Analyzing the abilities of creatures have always been a time-consuming task, and adding scenes also is. We will be slowly adding them to creatures and bosses, but for now you can take a look on creatures such as Gaz'haragoth, Animated Feather, Icecold Book, Squid Warden and the new boss The Brainstealer.

Some of you probably noticed over the years how some images did not look very sharp here on TibiaWiki. That was an effect of the image compression, which can make pixel art – such as Tibia's – look bad when it blurs pixels with each other. Not anymore! We tweaked a few things and all images should be as sharp as they can be. Check out the difference:

We have improved how we display game messages and most of them will now appear to you very similar to how you see them in game. Look messages, sounds, quest messages and more. This helps you identify what you are reading because if the familiarity with the client, and it also helps making TibiaWiki’s appearance more unique and connected to the game.

You see yourself. You are a knight.
You tamed the panda.
You advanced from level 100 to 101.
Sam says: Hello there, adventurer! Need a deal in weapons or armor? I'm your man!
There was no variation in your behaviour for 15 minutes. You will be disconnected in one minute if there is no change in your actions until then.

We started to use tabs in some places to organize and display information tabs. For example, on the pages of NPCs with multiple locations, such as Yasir or Rashid, it is possible to navigate through small tabs on the infobox that have information about their different locations, including the minimap. We hope this small change makes finding these NPCs easier and more intuitive.

Another example of page with tabs is our article on the Store. With the amount of products we have today, navigating through long lists is not very productive. Now, you can easily select each category and its subcategories to see individual lists.

We also did several other smaller improvements (as we're constantly trying to). Some of you might've already noticed the Boosted Creature in our Main Page and just recently we've added Rashid's map location there, too. We've also made some adjustments to tables so they look beter, some images were moved to the infobox, long lists were improved so they don't have to be split into multiple lists any longer, and more.

These are most of the things we have been up to over the past weeks, besides the usual content creating, reviewing and curating and the work on the soon to be released Summer Update. We have other projects in the oven, and you will probably stumble on them any time soon.

If there is anything you would like to talk to us about, remember you can join us in our Discord Sever. Bug reports on the new skin and theme, ideas for new features or questions on how you can contribute (including with the Scenes project), we are there to chat. And remember: TibiaWiki is a community project that anyone can edit, we will be glad to have you help making TibiaWiki better.