You need to travel from Liberty Bay to Thais. You will get shipwrecked on this Island of Goroma (~8% chance, so you might need to travel many times). The Captain will say that some Island Trolls stole supplies to fix the boat.
Go kill Island Trolls until you have collected 30 pieces of wood and then go give them to the Captain. Now he will take you to Goroma from Liberty Bay whenever you want, for 500 gps. The easiest way to collect 30 pieces of wood is to bring a shovel. With it, you can gain access to the 2 underground Island Troll areas.

Note: You can buy a rake in Venore for 20gp.

There is a sign posted in the Tavern in Liberty Bay:

To begin the quest, visit Eleonore in the Silverhand Manor located in the north part of Liberty Bay on a small hill. And talk to her about her ring.

To get to the location of her ring, go directly east out of Liberty Bay until you reach the main entrance to the large Fort (you will need to go up one level to reach the fort). Go to the north side of the fort, and look for a place that you can Levitate or use Parcels to go up. Continue up the mountain by using the various steps and levitate spots. Near the top of the mountain you will find a level with one or more Tarantulas. To the east is a tree with a Parrot in it. Use the rake on the tree, if you have the rake in your backpack you will also get the ring in it.

Then take the ring back to Eleonore.

Delivering money to Charlotta
The next assignment from Eleonore is seek out Charlotta and to give her 200gp, she is located in the slums of Liberty Bay. Take the 200 gp to the far south-west part of town, then return back to Eleonore and tell her the secret password, peg leg to prove your trustworthiness. 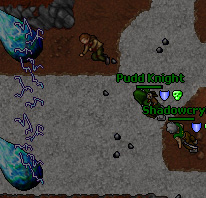 Note: Chickens and Rats can be found on the island. Black Sheeps are best to summon, or else the closest spawn is the underground in Liberty Bay, with the Novice of the Cults. However, Black Sheep are 700 oz. so its heavy. If you choose to do its this way, make sure you have the cap. Alternatively, if you are short of capacity, you could do this: 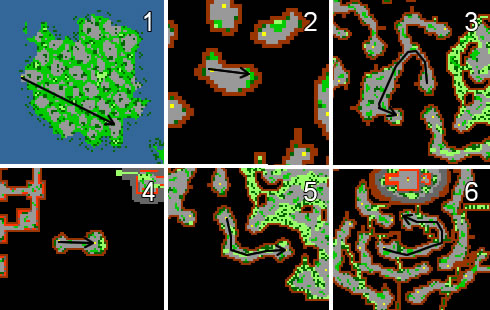 To access Kharos, you must travel south of Malada, where you will find a pitfall leading to the island underground. There you'll find Ferumbras Tower, and if you just go to the east you'll find a one-way teleporter to go back to Goroma.


In order to access the citadel, you must attempt to step inside the electric barrier barring it. Once you have done this, leave through the teleport and travel to Edron, where you must talk to Zoltan about Ferumbras' citadel. He will then give you permission to enter Ferumbras' citadel on Kharos for 500 gp.


There are no direct hubs to Kharos, and one must travel through the caves to reach it, even if they've done the quest.


Once you passed the energy barrier blocking Ferumbras Tower you can´t leave it there. You need to go east, down a hole, head west and go up a ropehole to leave.

Now go to Raymond Striker and ask for a new mission. He will explain you that the pirates have some deals with the alchemist Sandra, in Edron. They are buying a dangerous substance there called Fafnar's Fire. Raymond sends you to talk with her pretending to be the dealer sent by the pirates. Go and tell her: "Hello / Fafnar's Fire / Yes / Your continued existence is payment enough". By doing this, Sandra will be enraged and will cut any deals with pirates. Report back to Raymond Striker
After this you can get acess to Nargor, all you got to do is accept one of the following missions that take place there, and Sebastian will bring you there.

In the way you will face some Pirate Marauders, Pirate Cutthroats and Smugglers. Go down and go through the door, kill the Thornback Tortoise here and open the tortoise's nest. DO NOT EAT THE EGG IN ANYWAY or you will lose it forever and you will have to get a new one by buying it or by doing the quest with another character. Now report to Duncan and give him his Tortoise Egg from Nargor.

You will meet Pirate Marauders, Pirate Cutthroats and Smugglers on the way. Use your Fire Bug on the top left corner of the catapult and you will see a small explosion. Your job here is done and you should head back to Raymond Striker. After finishing this mission, your reputation in Sabrehaven will change to Cordial.

Raymond Striker is pleased with your acts toward him and the people of Sabrehaven. In his third mission, you are instructed to infiltrate the tavern on Nargor, and study 3 maps in which the pirates on Nargor have their raid plans laid out. But, to infiltrate their tavern you will need a full Pirate Set.
Once you have finally got the set, head to the tavern which is located inside the mountain. Follow the image above and go up the stairs marked at the bottom right side of it.
On the first floor it's recommend to use Levitate on the wall just east of the stairs you just came from, or using some boxes that you can find underground.

On the second floor, you will face a Pirate Buccaneer and 2 or 3 Pirate Cutthroat. You can just bypass them, but beware lots of pirates on the upper floor, including Pirate Corsairs.
On the third floor use some GFBs and go west to meet Vulterose.
A good tips here, if you have to do mission 3 and 4 (maps and proof of death), is hurting pirates on red hp, making them run away and not respawning. You can do all the travels Ray - Tavern without clearing tavern again.

Vulturenose is just outside the tavern. Speak to him while wearing the pirate set. Say "enter" he will let you trough the door.


Once you head up the stairs, chances are you will be surrounded by pirates. Avoid killing them, rather force them to run away, as you will have to return here twice more in a short period of time before completeing the quest.
The bar is a quite large room, there are 3 items that look like treasure maps on 3 different tables, these are the plans you are after. Just use them (Ctrl + Click) and you will study them. Once you have studied all of the maps, return to Meriana.


In Meriana again, Striker will give you his lucky pillow, and will tell you to deliver it to Klaus. Once again (for the last time, finally) go to the tavern and deliver the pillow to Klaus. He will, then, assume that Raymond Striker is dead, and will throw a big party for the pirates.


Return to Sabrehaven, and talk to Captain Striker, he will tell you how grateful he is, and will give you a Model Ship, since he doesn't have any real ships left to give. Also, he asks you to remember him at anytime about the pirate outfit, so he can give it to you.

Now you can follow the Pirate Outfits Quest for the addons.

Retrieved from "https://tibia.fandom.com/wiki/The_Shattered_Isles_Quest/Spoiler?oldid=334106"
Community content is available under CC-BY-SA unless otherwise noted.