The Queen of the Banshees Quest

The Queen of the Banshees Quest

You have to complete 7 seals to get to the final room with the rewards. Do not enter the third floor on Isle of Kings or you will have to pay a certain amount of money. Teleporting out means you have to get on the isle using the pearl seal.

Isle of the Kings underground and Ghostland

The quickest way to complete this quest is to do the seals out of order (the order they are listed in this spoiler), even though the actual numbers for the seals indicate a different order.

Remember: If you decide to stop at any seal, you'll have to go back the way you came, whereas, if you go all the way to the last seal (Banshee Queen), you'll be teleported back to Ghostlands without having to kill anything again.

The east switch is guarded by a Giant Spider. To get to the west switch you have to go through many scorpions, 3 demon skeletons and some ghouls and then in the switch room there are 2 Bonelords, 1 Demon Skeleton, 2-3 Stalkers and Ghouls.

In this room, you will see a blue flame. Every party member must go through the flame, and for every party member that goes through, 2 ghosts and a demon skeleton will be summoned. After going through the flame you will be teleported into a small room with another teleporter. Go through it to go back to the first seal room. First seal is done. In this room you will see two Monuments, on one is written "Brasik'thar belek Fatuhr", on the other "Krak uthl belom Muhl!".

Sixth Seal: The Seal of Logic 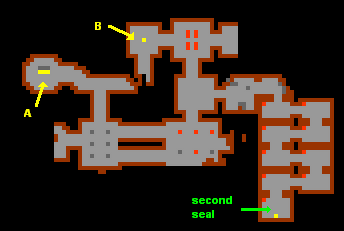 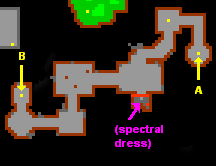 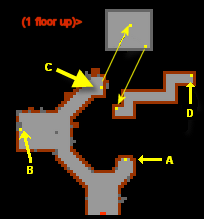 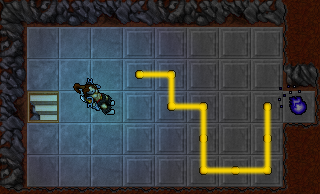 Fourth Seal: The Seal of Sacrifice

Use the vial and spill the blood between the two stones (on the tile that looks like the depot tiles), you should see a small animation on the stone tables around the tile. Go through the flame and back through the teleporter. Fourth Seal is done. 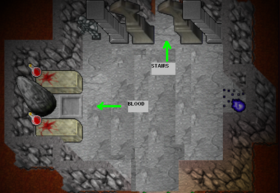 Third Seal: The Seal of Demonrage

Continue through the stairs in the 2 blood vial room located by the (B in previous image) and go from A to B from there. Then go again from A to B. 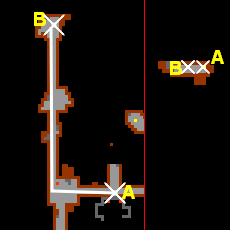 This part gets a little tricky. For every person in your party, you will face 2 warlocks. In the tight corridor to the south, you will see 2 special tiles, like the ones you see in front of the depot box. After stepping on either one, you will spawn the 2 warlocks. It doesn't matter if you step on them again after this. One will spawn north of the tiles, in the corridor, while another will spawn south in the room below, typically the NE corner.

It is ideal for the main blocker to go down first and keep the warlock occupied while the team kills the other. Having killed the other, the blocker should run up again, allowing the team to kill the second warlock. The person going through the tile should simply step on it and go back up the corridor unless they are the blocker.

After the whole team has stepped on a tile, each person must pull the switches in the order as shown below and proceed through the fire. Fifth seal done. 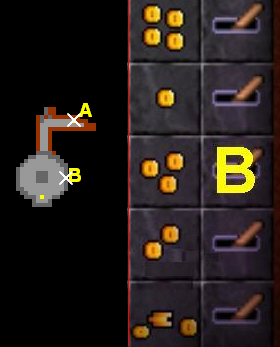 Go from A to B as shown in Image 1, you will go to C shown in Image 2 then go north (you will face 2 Giant Spiders), after that use pick on the place marked in the map and you will go down to Image 3. On Image just go from A to B there is nothing to fight there. Go up in B in the Image 3, but be careful there will be a lot of demon skeleton and other creatures to fight up there in Image 4. 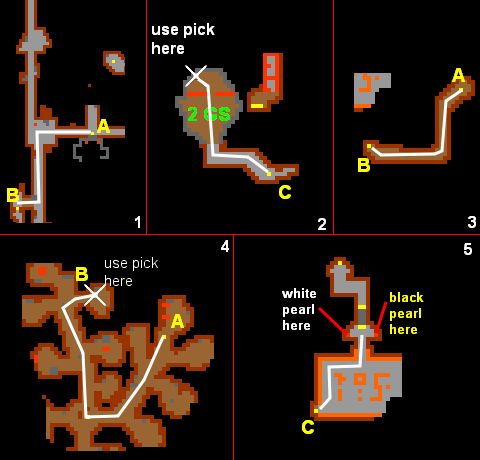 In Image 4 go from A to B and use pick to get access to the sixth seal room. Note: you will pass by a rope spot in the middle of image 4, this leads to the catacombs of the Isle Of The Kings, the fastest way out of the quest from here.

Once you have found the place to use pick go down and face more demon skeletons, place the pearls where the picture shows and pass through the teleport.

You can use either left teleport or right teleport, it doesn't matter. After you have walked through a teleport, head north through a couple of poison fields and walk through the teleport which you find at the end of the way. In the room where you now arrive, walk through the teleport which you see there. You will be taken back to the spot behind the pearls teleport - just walk in the teleports there to be returned to the spot with the sacrifice tables. Sixth seal done. 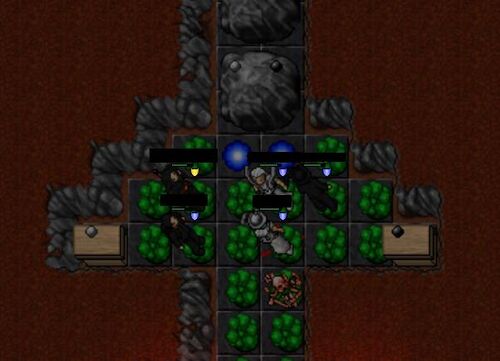 Last Seal: The Kiss of the Banshee Queen

Go to The Queen Of The Banshee (it's close to seal #4), she is surrounded by 4 banshees, 2 mummies, 2 ghosts and 3 stalkers so be careful killing them (UE'er would be nice). 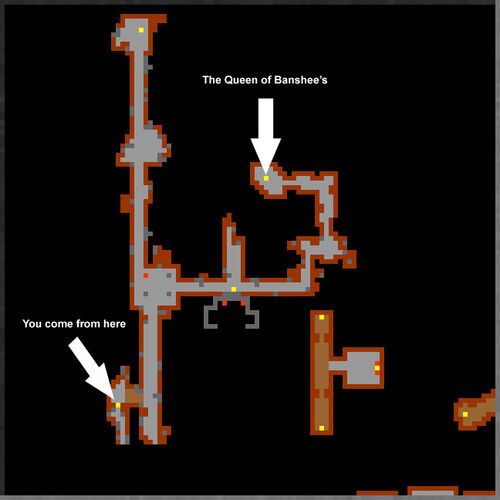 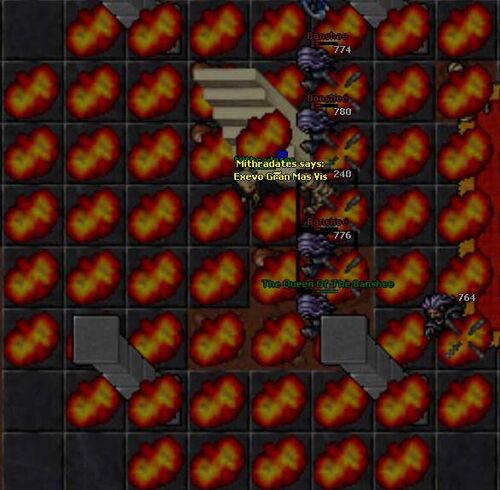 After clearing all of the banshees around the Queen talk to her and say:

You will then be teleported to a small room with a "your dead body". Go up the stairs and you'll be in the surface of Ghostlands again.


Note: Keep in mind that if you are not level 60 you will NOT be able to finish this seal, the queen will say that you are not experienced enough.

The final room is west of the Banshee Queen, you need to get there again all the way from the Ghostlands, it's also possible to go via the Isle of the Kings.

Once you go downstairs you can't go up again. The final room contains 6 Banshees, 2 Dragon Lords and 2 Giant Spiders, usually you have to lure them (depends on the situation). Kill everything, and grab your rewards.

NOTE: Once you Leave the room (walked through the Magic Forcefield), you can't enter again. So be sure to grab all the rewards.

After entering the Magic Forcefield you will be teleported to the Ghostlands surface, here. 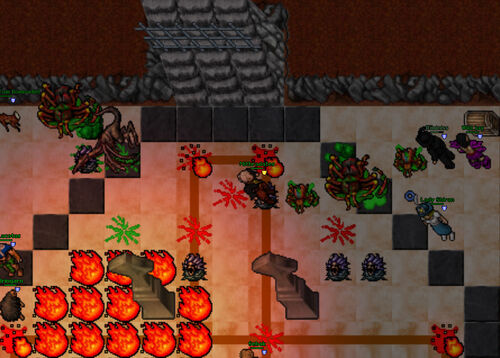 Retrieved from "https://tibia.fandom.com/wiki/The_Queen_of_the_Banshees_Quest/Spoiler?oldid=748329"
Community content is available under CC-BY-SA unless otherwise noted.