Note: to do this mission you need the spell Levitate or 3 parcels/crates/ice cubes.

Report back to Ongulf and ask him for next mission. 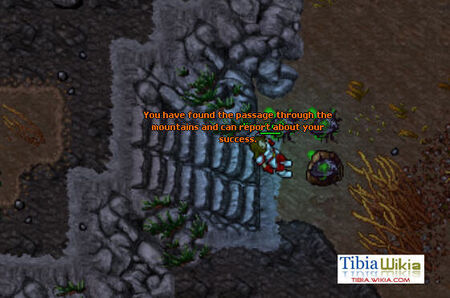 Mission 02: From Kazordoon With Love

Talk to Ongulf, he will tell you that he needs to send a message to the dwarves in Kazordoon. Travel there and then walk to the Dwarf Mines to the west. Cross the two rivers and find NPC Melfar here. He walks on the surface near the mine west of the storehouse and Royal Mailbox and will give you a mission. He gives you a Flask with Beaver Bait that you must use on the 3 trees(Trees will be marked on your map), in any order(but at Tree 3 a squirrel steals your bait and if you do this tree last you don't need to chase it).

Return to talk to Melfar before heading back to Farmine. 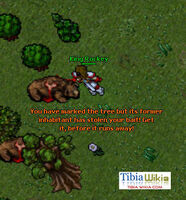 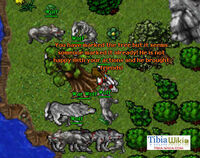 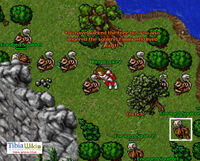 Mission 03: Strangers in the Night

You need to find the tribe which lives in the mountains. Walk down the mountain almost like you did in Mission 01, and directly walk north here after you levitate (or, if you're lucky enough, use parcels to walk) down. The vines are pictured below, you must use it to climb. There lives the tribe, most of its NPCs talk a weird language, you need to find their leader Lazaran here, who speaks very bad English. Ask him for a mission, then for peace and he will grant it. 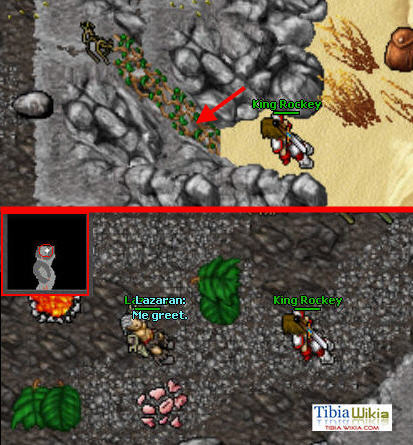 After you talked with Lazaran and come back to Ongulf, you will see Farmine has reached Stage 2 of its development. Pompan will trade in normal Equipment now, Esrik will not trade yet, with Prezil nothing changes either.

Mission 04: The Mine Is Mine

Head back to the levers and this time use the left one. Go North through the tunnel of Stone Golems. Kill the boss, Shard of Corruption at the end of the tunnel. 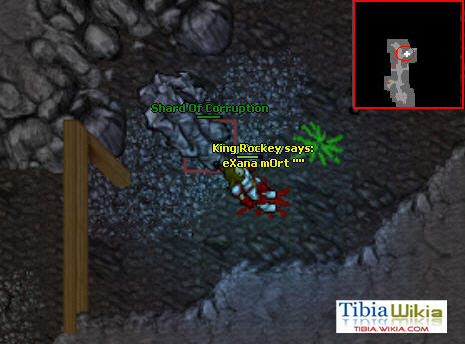 This mission consists of getting support from 6 people around Tibia. You need to say farmine and then one of the following keywords (depending on the person):

These words may be different for every person. Yet, you can interpret which word you should use.

If you do not ask them the correct word you will have to appease them with something to get another chance. You can be unlucky and they still refuse appeasement even though you say the correct word. Just go back to Black Bert, buy the bribes, and return to the NPCs and speak to them again. It is completely random whenever it will work. Saying the same word several times may have different effects.

NOTE: Having done The Thieves Guild Quest is good for this mission, in case you say the wrong keyword (and the NPC gets mad at you) you can buy something from Black Bert to continue the negotiation.

If you don't mind spending the money, here is a recommended number of each item and will 80% guarantee you don't need to do any excess travel

If time is not a concern simply 1 of each item will do to save you hassle, otherwise you can take your chances and simply buy items only when you need them.

Support of the Thaian king

Talk to King Tibianus in Thais here. If you fail to convince him first time you need to buy and give him a Flask of Crown Polisher to continue.

First time or wrong use the word "flatter".

Support of the Venorean traders

Talk to Leeland in Venore (west of Depot) here upstairs. If you fail to convince him first time you need to buy and give him a Soul Contract to continue.

First time use the words "impress".

If wrong use the words "reason" or "flatter". 50 percent chance of getting it right.

Support of the Explorer Society

Talk to Angus in Port Hope here. If you fail to convince him first time you need to buy and give him a Map to the Unknown to continue.

First time use the words "bluff" or "impress". 50 percent chance of getting it right.

If wrong use the word "impress".

Support of the Edron academy

Talk to Wyrdin in the Ivory Towers here. If you fail to convince him first time you need to buy and give him an Almanach of Magic to continue.

First time use the words "plea", "bluff" or "flatter". 33.3 percent chance of getting it right.

If wrong use the word "impress", or any of the others.

Support of the inventor Telas

Be careful here since sometimes a werebadger appears. Close the door to Telas' housoe when talking to him to avoid being surprised by the creature.

Talk to Telas in Edron here. If you fail to convince him first time you need to buy and give him a Universal Tool to continue.

First time use the words "reason" or "flatter". 50 percent chance of getting it right.

If wrong use the word "plea". If wrong, the word "reason" may work too.

Talk to Humgolf in Kazordoon here. If you fail to convince him first time you need to buy and give him a Baby Rotworm to continue.

First time or wrong use the words "flatter" or "threaten". 50 percent chance of getting it right.

Once you have completed this mission, you have access to the Depot and Tavern in Farmine. To see this stage 3 of Farmine you have to use the lever behind the right sealed door to go away to the surface. When you come back you'll see the changed Farmine.

Talk to Ongulf about a new mission, and then go to NPC Curos here, leader of the Orcs, in the middle of the Zao Steppe in the north-east area of an Orc camp (there are only weak Orcs here). Ask for a mission and accepts prove yourself in a test. You now have to survive 2 minutes with the Mooh'Tah Master in a small Arena. You will find the teleport entrance up some stairs only a short distance away from Curos to the south-west (here). Enter to the teleport when you are ready to face the Mooh'Tah Master. You can just run around in this small arena for the duration of the 2 minutes or you can just block, whichever you prefer. Just avoid the Mooh'Tah Master's energy beam (by staying diagonal to him) and you will be fine. After the 2 minutes is up you will be teleported to a small spot below/outside. Now go back to NPC Curos and tell him you have completed the mission. 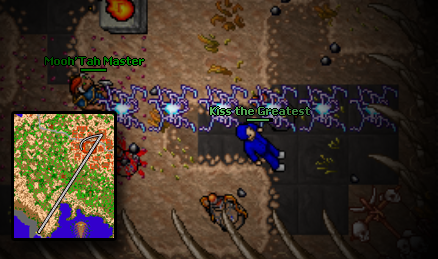 After making peace with the Cavemen and the Orcs for Ongulf, you now have to contact the Lizards, the real rulers of Zao. After accepting the mission from Ongulf, go to the Dragonblaze Peaks and find a rope-hole (here) where you have to go up and follow the way around the mountain (there is only one way). You will eventually go down and meet some High Class Lizards. Follow the way round (see 2nd image below) and go down some stairs to another level with more High Class Lizards until reaching a quest door. Enter the room behind the door and you will be teleported into a small prison. Mission 08: An Offer You Can't Refuse 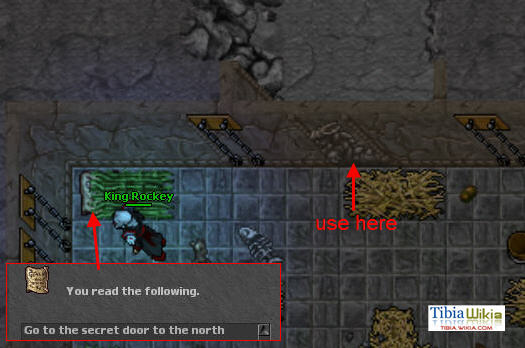 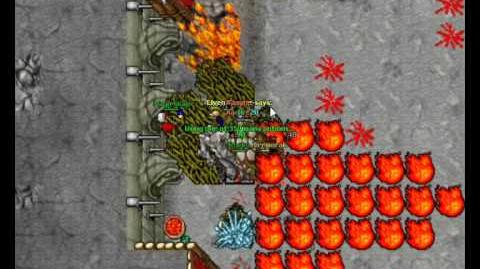 Go to the teleporter in the north of Zao Steppe and walk into it to get to Muggy Plains. Once there, head a little north-east, following the shore-line, and you will find a ferry/boat (here). Ask NPC Zurak for passage to the Isle of Strife, where you will have to follow a way up several stairs and fight quite some number of High Class Lizards (among which are some annoying Lizard Dragon Priests and even some Draken Warmasters) to reach the entrance of the Arena at the top of the mountain. There is a Chest (Quest) to the left of the stairs as you go down to meet the arena NPC Chrak. Don't forget to collect the Tome of Knowledge from this chest. Then go east to speak to the NPC Chrak to fight in the Chazorai Arena. You will have to go into the Arena with another player who hasn't already completed the fight, because 2 players are needed, at the same time in order to enter. Choose your companion wisely!

Note: To complete this mission successfully you will need a strong team and either bring some friends who will help you to reach the arena without wasting too much of your battle supplies or bring some extra pots! Of course, only 2 players can go, so it is recommended you use either a Knight and Sorcerer, Druid or Paladin team, or just 2 Paladins can do it together. Another possibility is Knight and Paladin. If you use a Knight and Druid team (Most recommended), the Druid should sio and use Sudden Death and Icicle runes as the Knight spams Challenge. The mage should look at using 180 charges of Sudden Death, with 160 Great Mana Potions. 2 Knights could do this as an Exori Gran team but they would use lots of Great Health Potions and Mana Potions. As a level 100 Knight you can easily block this quest as long as the shooter is capable of killing the Creatures in time. The last few creatures will also retarget semi-frequently, so it is still recommended to have enough hp/mana to take 1200 damage without dying. The main problem encountered is timing, a lot of people die through lack of damage per second, and end up with 3 or maybe even 4 of the last boss monsters attacking them at once, which is a very risky situation no matter what level you are. 2 Sorcerers could do this using Hell's Core with relative ease, of course using Sudden Death runes whilst recharging mana. This is the fastest but most dangerous method as there is no one to take the damage and some creatures are very fast.

You will have to fight 13 Boss monsters, in waves of 2 at a time.

Pay high attention that you have few minutes time to kill each wave of bosses and if you are not fast enough, next wave of 2 bosses will spawn after 90 seconds, even if earlier bosses are still alive! Also note that sometimes both bosses may spawn outside your screen, so you can time the 90 seconds to know when every boss wave will spawn and lure them to you if needed. When you have defeated Tirecz, you will be teleported to the reward room and the following message will appear:

You have won! As new champion take the ancient armor as reward before you leave.

Don't forget to grab your outfit from the wardrobe in the reward room before you leave.

Don't forget to report your victory to the NPC Chrak! If you don't report back, you can't say "mission" to NPC Ongulf to complete the quest.

Go back to Farmine and talk to Ongulf about your mission. You will receive 8000 experience points.

Mission 02: From Kazordoon With Love

Mission 03: Strangers in the Night

Mission 04: The Mine Is Mine

The New Frontier Quest Note: If you get it wrong first time, the npc you talk to will say something different than below.

Support of the thaian king

Support of the venorean traders

Support of the explorer society

Support of the Edron academy

Support of the inventor Telas

Mission 08: An Offer You Can't Refuse