You see The Halloween Hare.

It spawns every year on October 31 in Rookgaard and Mainland since 2006, and in Dawnport since 2014. The Halloween Hare can neither be harmed, nor does it deal any damage. Therefore it can neither be killed, nor does it drop any loot. When near players it will "attack" the area around them occasionally with a non-damaging boulder which will change the appearance of all players in its radius into a Vampire, Ghost, Witch, Skeleton, Mummy, Pumpkin head. All changes per boulder are the same so all within the radius of one boulder will receive the same costume. This attack also can affect NPCs and creatures, including itself. You can not use it to train because it won't cause effect in your skills.

You can take off your costume by watching time on any nearby clock or by taking a swim. 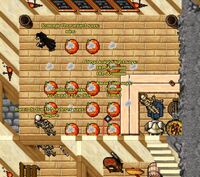 The "morphbomb"
Add a photo to this gallery

It can change any player or creature's appearance into either a Vampire, Ghost, Witch, Skeleton, Mummy or a Pumpkinhead.

Wanders around Rookgaard, Dawnport and Mainland south of Dwarven Bridge. Keep in mind that the Hare can be lured far (as far away as Plains of Havoc).

It can't be pushed, but it can push objects. It will try to keep 4 squares from players. It retargets very quickly.

No strategy needed, as it doesn't do any damage nor can it be killed. Some players enjoy trapping and attacking it. Though, trapping him will reduce the frequency of its attacks.

In 2007, it could change the player's appearance into Phantasm, Pirate Skeleton, Dark Torturer, Blightwalker and Spectre also.
In 2005, the Hare spawned several times a few days before Halloween to get everybody in a costume for Halloween.

Retrieved from "https://tibia.fandom.com/wiki/The_Halloween_Hare?oldid=760349"
Community content is available under CC-BY-SA unless otherwise noted.