Deep in the earth, near hell, the demons guard their great treasure, who only the bravest could dare to retrieve!

Most creatures are on the path to the quest such as Hunters, Demon Skeletons, Wild Warriors, Priestesses, Monks, Heroes and Minotaur Guards. The quest involves only Angry Demons and summoned Fire Elementals.

Demon Outfits and one out of four available items: Magic Sword, Demon Armor, Stonecutter Axe, and a Present Box with an Annihilation Bear inside. Annihilator achievement.

It is recommended that you be over Level 120 to succeed. You cannot leave the Annihilation room until you clear a path blocked by two Angry Demons. You can only enter the quest room in a team of 4 players who have not previously completed the quest. Be prepared to have a huge supply of potions as well as other aids like several Might Rings and a few Necklaces of the Deep. The blocker may consider using Stone Skin Amulets.

A Level 100 mage can now complete this quest without having an insane amount of luck. A full magma set, a few Elven Amulets, maybe 5-10 (they last much longer than one would think), and about one backpack of might rings, in use with great mana potions, will allow any mage to gain more mana than is being drained by fire and energy damage. The key is to kill the first Angry Demon as fast as possible. The difference between 6 and 5 demons is very important and much greater than one may think. It is also best if this mage goes with other mages and perhaps one knight to block, because a team of all knights and one mage would be too slow for a mage to even cap the amount of great mana potions s/he would need.

Depending on how long the world has been around relates to the amount of other level 100's. It's good if each player is capable of handling a Demon on their own.

The quest is located in the central cave of north Edron, the Hero Cave. First encounter is Hunters outside the cave. Three levels down of Wild Warriors, Demon Skeletons and Priestesses. The fourth level has 3 Dragons. Fifth has 2 Monks and a Hero. Sixth floor first corridor contains an assortment of the Demon Skeletons, Wild Warriors, Priestesses, Monks, and Minotaur Guards. Take a right at the bottom, encounter the last three Creatures named at the north and a Hero spawn south. Go on to the next passages that goes south, across from the Fire Elemental room. Hunters and such are here, and at the end is an level 100 gate of expertise and a quest door that leads to the teleport room here.

The four level 100's line up on the designated squares and the foremost pulls the lever. You are sent to a nearby room with six Angry Demons. Two north, two south and two dead ahead blocking the door. They will attack until dead and once they are dead and you succeed, you can enter the door to the reward. 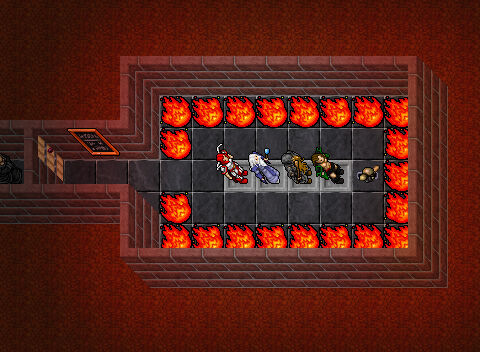 The four members of the team must each stand on the four tiles. Once all four members are in place, the lever must be pushed in order to teleport the entire team instantaneously to the dungeon with the Angry Demons. Remember, the blocker or highest level should be farthest to the right. 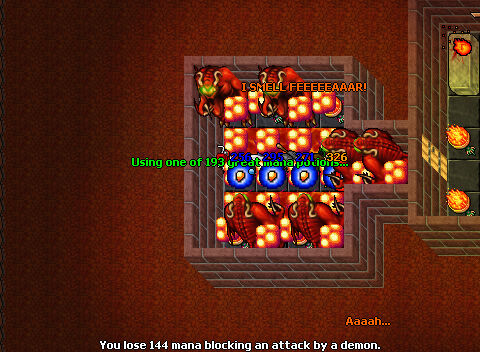 Upon entering you will see many Angry Demons. Attack only the two to the team's right side. Make sure the entire team attacks the first of the two demons at the same time in order to kill it as fast as possible. Also Mages below Level 120 are recommended to use Blessed Steak to give a extra full mana bar when the first one is gone to greatly increase the survival rate. Also not a bad idea for Mages is to get close to leveling before entering the Dungeon (within a few exp from leveling) so when the first demon dies you will level up and receive another full mana bar. 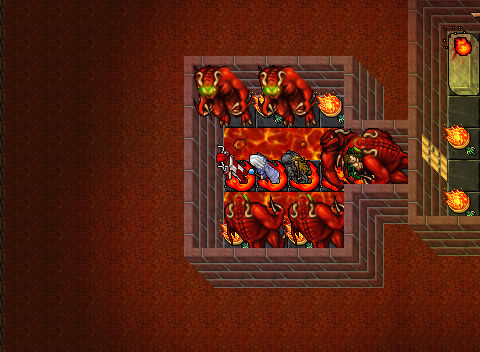 The leader, or head member, can put the second demon on follow, so that as soon as the first demon is killed, (s)he will move forward one square. This will reduce the amount of potential Great Energy Beams used in a combo on this player, greatly increasing his or her chances of survival. With this trick (s)he will have a smaller chance to get blocked by the Demons' summons. 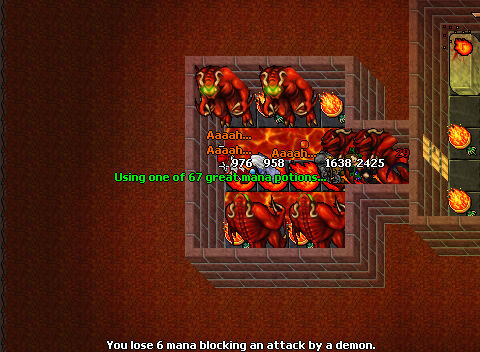 Once the two demons are dead, immediately run east through the door which will not be locked. Close the door behind you so that stray Fire Elementals and great fireball attacks do not make it through the door. 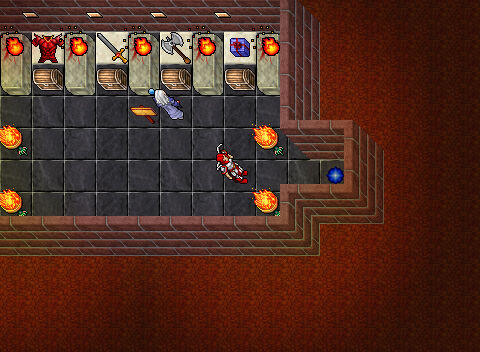 After choosing your reward, go through the teleport that is east of the reward choices. This will teleport you in front of the level 100 door at the beginning of the quest.

You can only enter this door once, so choose your reward wisely.

Blocker may bring fewer because he will be healing more than the other knights, the trick consists on shooting the demons with icicles while you heal, always shoot the icicle when you are full health, with this a team of 4 knights shooting Icicles can complete the quest in less than 2 minutes with a waste of about 350 Great Health Potions on average. 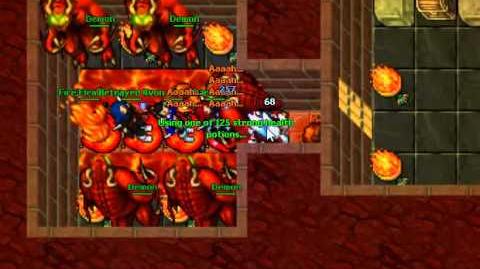 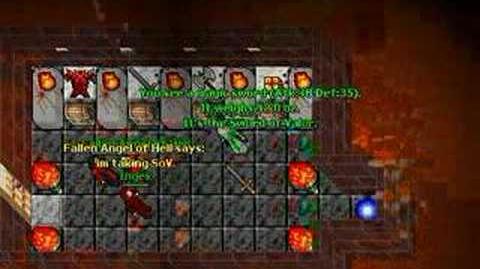 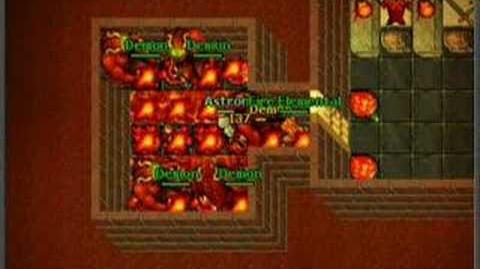 Best Anhiliator on Tibia
Annihilator After 7.8
Add a photo to this gallery
Retrieved from "https://tibia.fandom.com/wiki/The_Annihilator_Quest?oldid=771193"
Community content is available under CC-BY-SA unless otherwise noted.