View source
watch 02:30
Dead Cells Final DLC - The Loop
Do you like this video?
Play Sound

You see The Abomination.

The Abomination is a raid boss that spawns approximately every 180 days. When this raid happens, it starts with the Abominable Spawn appearing in 4 out of 10 possible locations. The miniboss on the 4 locations share the same health pool and it seems to be required to have players in all rooms to defeat it. The remaining portals will bring you to empty rooms. The possible locations are:

Once the Abominable Spawn is defeated, its corpse will become a vortex that brings players to the lair of The Abomination. Only through the 4 original portals where the Spawn was present it will be possible to reach The Abomination.

The Abomination was first sighted and killed on Belobra on July 14th, 2021, two days after its implementation in the game.

Before it appears, a message is broadcast in white text to all players on that world:
Something abnominale is rising! Search for its spawns! Gather an army and destroy this threat!

The Abomination appears inside his own room under the Ice Islands, here. Information on how to get there is explained under Notes above.

Secondary blockers should lure Abominable Servants and Abomination Cultists to one side of the room (for example, the east side) while the main blocker lures The Abomination to the opposite side. It's important that nobody tries to block The Abomination and one or more Abominable Servants at the same time as their presence seems to increase The Abomination's attack power. This way, shooters and healers will stay more close to the center of the room. It's advised to stand in diagonal of it in order to avoid its plus-shaped attack that goes along the entire room (if you are further from the Abomination, even outside of its vision, but still standing directly in front of it vertically or horizontally you'll get hit).

When The Abomination says a vocation's name, every character from that vocation should retreat for a few seconds (6-8?) until it casts an area spell that affects character from the said vocation. When it mentions the knight vocation, the main blocker is advised to retreat to the north, not luring it into the shooters and healers. When it says "YOU ALL .. WILL .... DIE!!!", a 10-second timer will be visible under its name and everyone should pay attention to it and retreat before the timer ends in order to avoid its special "doom" spell. This "doom" is UE-shaped and includes another plus-shape attack, so once again do not stand directly in front of it.

The Abomination is a Defiler boss. It was summoned by CipSoft members on Test Servers for Christmas Update 2007 and on some other test servers since then. 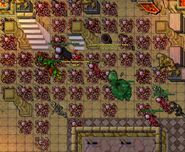 With the Summer Update 2021, The Abomination was revamped and introduced in the game as a raid boss that spawns approximately every 180 days.