A Test Server is a special Game World launched before major gameplay updates. The server may be rotated between Open PvP, Optional PvP and Hardcore PvP. Often, strange things can happen during test servers (e.g. Orshabaal in the center of Thais).

Since 2005, there are two Test Server Game Worlds:

There was also Brazilera, which was hosted in Brazil shortly before the Tenebra game world existed. It is no longer hosted. It was a public test server that was available for two weeks at the beginning of September 2004. On September 16, 2004 the Brazilian gameworld Tenebra was released. Less than a year later, Tenebra was moved to the United States of America because of connection problems with the Brazilian internet service provider. 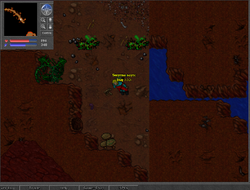 The main function of the Test Server is to find and report bugs in a major game Client Update, so they can be fixed before the Update is put into the normal Game Worlds. Some bugs are content related (e.g. a typo in the words of a NPC), some are technical related (e.g. when you go down stairs you are pushed back up).

Test servers are divided into private and public.

Private Test Servers are mainly for reporting bugs, weaknesses and mistakes. Only CipSoft Members, Community Managers, Customer Support, Tutors, Senators and Fansite Representatives are invited. PvP is possible, but isn't allowed there unless people agree to attack each other.

Public Test Servers are available to everyone with a Tibia account. Although sometimes the public test servers are only open to Premium Account players. They are also for testing and reporting bugs, but many players treat it as a chance to kill others without losing anything in real Tibia.

Banishments on test servers are not saved on normal Tibia servers. However, sometimes Cipsoft can decide to move the banishment onto the regular servers if the offense is bad enough.

To see if a test server is running, you can check the Official Tibia Homepage's News Section (here).

To join to the Test Server, you must download a "test" Client from the tibia website, with which you can login to the Test Servers, but not to any normal Server. You must install the Test Server client like the normal client, but you can have both clients on the same machine without any problem. Just remember to only log into one client at a time.

Retrieved from "https://tibia.fandom.com/wiki/Test_Server?oldid=764879"
Community content is available under CC-BY-SA unless otherwise noted.