The Temple of Light is situated on an island situated north-west of Rookgaard and west of the Island of Destiny, here. It was introduced in the Autumn Patch 2009. The island is only accessible in November during the Lightbearer Event by talking to Lucius in the Magician Quarter of Yalahar. The surface of the island is divided in two parts, one part is the Bad Side and one is the Good Side. Failing or succeeding the event will result in the ability to enter respectively the good or the bad side. Within the Temple there are some Statues of Fafnar that can be used to get a reward after succeeding the event. 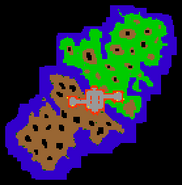 Add a photo to this gallery
Retrieved from "https://tibia.fandom.com/wiki/Temple_of_Light?oldid=749231"
Community content is available under CC-BY-SA unless otherwise noted.