Do you mean spawns a few floors BELOW the iron hammer quest?
Craggles

No, I think he means that the Horned Fox spawns in the minotaur tower above the iron hammer quest. The same tower with the Stell helmet quest in it. Not a very good description. Maybe I'll change it to something that is more reflected by the NPCs.

Is this its location?

HOW THE HORNED FOX RESPAWNS?

NOTE that horned fox IS NOT like other monsters' raids (white-message raids). It CANT respawn when you're waiting on his level or even above or below him. HORNED FOX needs full respawn on his level and on -1, +1 to respawn. I killed it twice and it always has been full respawn there. Everyone who killed it can tell you the same thing. The best way too loot it is to logout on -1 or +1 with invisible, and login from time to time to check Fox respawn.
Genco 17:14, 27 August 2008 (UTC)


Yes he spawns when theres people on the screen, non anounsed raids are like that, I hapen to see mino mage in rook spawning on screen, people has see orc with sam backpack spawning on screen, and people camp (killing all respawn) the horned fox respawn place and he still respawn with people next to him.
Kwigon the sharpshooter 14:56, 27 August 2008 (UTC)

This are still only rumours. Anyone can prove that it respawns on screen? ofcourse raids spawns on screen but horned fox?! I know people are camping on his level to "kill him when he apear", but i think he never realy did apear. If he spawned next to YOU or someone you know, give me a proof.. screen, movie...
Genco 17:14, 27 August 2008 (UTC)


Good idea but how to prove that Fox spawns only with full respawn with a screenshot or even with a movie...? Other thing is that Fox respawns once or twice a month on server... :/
Genco 19:45, 27 August 2008 (UTC)

Yea sometimes it don't respawn for 3 months or more (or nobody kills him and don't get registered at erig) in some servers. Is almost imposible to take screenshot in the moment it spawns (unless you use a bott to take a screenshot wich would be illegal) not to mention a screenshot can be easy faked.

You can ask around in servers forums if anyone has see bosses respawing on screen (wich they do).

I think its better just to say where it respawn and let people figure out if they want to camp the place or log in and out invisible or just hunt around.
Kwigon the sharpshooter 01:39, 28 August 2008 (UTC)

Problem is that if they stay on his place, and he cant respawn then its blocking respawn for both - invisible login and camping...
Every screenshot you can find on internet is with Horned Fox respawned in full respawn around and there is NO screenshot with Horned Fox respawned solo. You said you saw mino mag respawned on rook, on your screen but this "blue vortex" could be a summoned snake, and Mino Mag could step on it before it disapear ;p. Anyway, there is no proof that EVERY Boss respawn like raid monsters. I can ensure you, that when i've been killing Fox (twice) it has been full respawn around.

IF ANYONE ELSE HAS KILLED THE HORNED FOX HIMSELF, TELL US PLEASE IF THERE WERE FULL RESPAWN AROUND OR FOX RESPAWNED ON YOUR SCREEN WHEN CAMPING?


You dont know much about respawn.

I know people that where in the floor where he respawn chating in game chat and bamb the HORNED FOX, and wild minotaurs spawns with him then the hornet fox summonds more minos, also people that hunt in the place they go up and down his spawn point and they go down for a second then up and the place is full of minos with the boss. Also if you don't know monsters spawns if you are in a floor up or down that don't stop them for respawning. He dont spawn solo he gets summoned with a bunch of wild minotaurs. Not mino mage.... aprentice sheng and he respawns with 4 to 6 minotaurs and they log in with the blue orb like in pirate or orc raids. Your logic to say that nobody must be in the fortres for him to respawn is nuts, If theres people on it you wont find him cause other people will kill him. And if theres nobody hunting around, and he respawns you will find him (cause there nobody but you to kill him) and if theres nobody around and he respawns and some one else comes and kill him you won't know he was there.
Kwigon the sharpshooter 18:26, 28 August 2008 (UTC)

Well, ok. I agree that The Horned Fox respawns with bunch of minotaurs, and he summons some aswell, so there's a strong possibility that what they're saying is truth ;) (many people think that there are only summons) If i understand you well, you should stay on his respawn level with SD prepared and wait till he apear with blue orb, right?

Anyway, im still waiting for someone's else confirmation. Ask this guys from Game Chat if they can write something about it here. Thanks.


Ok guys, after 3 weeks of camping the spawn, the horned fox spawned with full respawn on his level and while my character was sitting -1 level of him, no i did not have time to make a video nor a screenshot, i was too exited, but it DOES spawn if you are camping it -1 or +1
Rxwulph 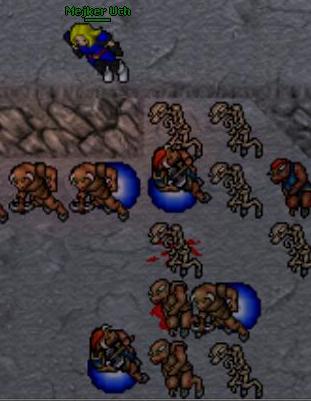 
Hello, I just wanted to tell you that no boss respawns can be blocked by players, that have been confirmed by GMs in the past (even though I of course can't find the post to confirm it). However all bosses(including the Horned Fox) spawn with players on screen. Hope that explains it. Kseni Of Chimera 14:12, 23 February 2009 (UTC)

Here, it says The Horned Fox has no immunities, while a strategy would be wearing a Stealth Ring or using the Invisible Spell, since then only the Minotaur Mages and the Fox himself can see you. So, is he immune to invisibility or not?

He is immune to invisible (he can see you). Other monsters that respawns in the same time with HF can't, and that's why people use invisible - to reduce hp lost taken from other monsters when killing Horned Fox.

so what floor does he actually spawn on in the tower? i'm not sure if he can spawn with or without a person on his floor or -1 or +1 but i intend to find out...but i gotta know which floor he is on first before i can test it.

everybody agree that he spawns if you camp -1,+1? in full respawn?

Did you see the screenshot posted above? it removes any doubts there was before (even though it is possible that it's fake, I doubt it). -- Sixorish 13:56, 23 February 2009 (UTC)

Where is this boss's teleport loacted after you do the turmoil of war quest?

It's possible to kill him as part of the killing in the name of quest even when you're level 40+ as long as you got the quest under level 40, tested it last night with my level 45 sorcerer. Hugoshoyru 12:03, 1 August 2009 (UTC)

Retrieved from "https://tibia.fandom.com/wiki/Talk:The_Horned_Fox?oldid=256408"
Community content is available under CC-BY-SA unless otherwise noted.