The images on the spoiler are gone, can they be replaced?

I've been told that when the griffin claw is in bloom the entire server gets a message like a raid saying the weather looks good today or something similar. That at all true?

No, tibianews once made a shortnews giving that message (which was the first time the griffinclaw bloomed) but as far as I know there is no such message.

Actually, I was online for nearly the entire day I got the griffinclaw, but true it could have been possible that I missed such a message.

So just wait until somebody does see the message him/herself, and add that message to the article. --Edwin de waterman 15:25, 28 October 2006 (PDT)

I heard that the flower blooms on the first day of the month and some time ago i really went there on 1st and i found it bloomed. is this any helpful as an spoiler/help? Shanra 11:12, 27 December 2007 (UTC)

Well, I can confirm that on Candia the flower was blooming on 29 July, 11 hours after server save. My druid char camped there to get his flower sample for the outfit. I will try and check on it in 30 Tibia time days (30 hours) intervals. Anyway, this bloooming contradicts the common believe that it would always be blooming on the last day of a real time month. 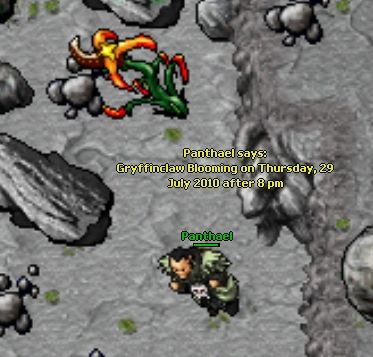 It was used to respawn the last days of a month, but it was a loong time ago, since cip changed the boss system the flower respawn is random and can be found at any of the 30 days of the month, still it is unknow how and when.. now that is random. for example today May 12 the flower spawned in Fortera around 5-6 pm CT --Zhujin (talk) 01:59, May 13, 2013 (UTC)

Retrieved from "https://tibia.fandom.com/wiki/Talk:Blooming_Griffinclaw?oldid=497108"
Community content is available under CC-BY-SA unless otherwise noted.