I'm pretty certain that this weapon is a fake. The sprite for it is very bad and very little in known so im gonna say this is a hoax.

It might be a real weapon, but someone has to take a better sprite file. As the spoilers say, about 60 new weapons would have been added. It looks like the weapon in the lower left corner. 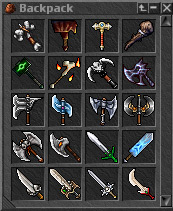 I changed it back, sorry for all the edits, at first I thought it was too small, but I guess if it is people can look at the earlier versions.....unless I did something wrong, thats what it should look like ingame--Sixorish 07:22, 4 August 2007 (PDT)

It's been quite A while since I flagged this weapon as possibly being fake. Has anyone confirmed that this item is real and if so does it look as shown and is called the assassin dagger? Though I do agree with Sixorish, that that name may have been made up when some one found the sprite who knows where. ^_^

Its been some time since I flagged this weapon as possibly being fake. Aging, has anyone comfirmed that this weapon is real?

Also the "anonymous" user Kent added that the Juggernant dropped this weapon with no such proof that it did, so I still have my doubts of this weapon being real. ^_^

well... i guess it's real.. since it appears in a screenshot on the tibia page, also the outfit kinda suggests it's name doesn't it? ;) http://www.tibia.com/abouttibia/?subtopic=screenshots&screenshot=cathedral

True, but we all know that Screenshots can easily be faked since this is a 2D game, and CipSoft makes some pretty faky ones themselves. Just look threw the Screenshots page and look closely at the equipment the players are using. But it may be real yet unobtainable. ^_^

I still have my doubts its a dagger, to quote a popular sword in gaming (and im not a Final Fantasy nut either!! :P) It looks to the size of Cloud's Sword form Final Fantasy, Like Sixorish said. ^_^

I've looted this weapon myself from a Fury inside a bag. If you can loot it though from Juggernaut I doubt, but from Fury you can..

the price for this weapon is too hi, since yo can get it from a quest

you need 10 tusks for the quest (very rare loot from elephants...) and quite some money (like 5-10k depending on different things) plus a lot of time to do the quest. If you calculate 1k per tusk (which isnt too much atm) you got up to 20k costs on your hands.

I agree that the price range is still pretty high and it will probably drop once more people have done the quest but atm, its pretty much what you will need to pay.

...you probably didnt do the postman quest right? Saves quite some cash :p

I'm updating the price range, as this item has now lost some of it's value due to the number of people who have completed the quest at least on my server, and I assume that the value has gone down at least to some extent on other servers as well. I'm not touching the upper end as the younger servers may still bring this. Roasted 00:43, 22 August 2008 (UTC)

Retrieved from "https://tibia.fandom.com/wiki/Talk:Assassin_Dagger?oldid=183795"
Community content is available under CC-BY-SA unless otherwise noted.