At the northwest shore of the island of Rookgaard there's a unreachable small isle with a sword in a rock surrounded by fire (here). Near this sword is a sign where that can be read:

You read: Only the humble may touch the Sword of Fury

This is the Sword of Fury; although it's called that way, it is a simple Spike Sword. Many have wondered if this sword is obtainable. Many have tried, but failed, to lay hands on the Sword.

Perhaps what the sign says, "Only the humble one may touch the Sword Of Fury.", is a cleverly placed message by CipSoft. Perhaps, upon seeing the message, a new player will behave him/her self, thus acting humble. Who knows if the Sword of Fury will ever be obtained? Perhaps the answer is right in front of our noses, waiting for us to lay hands on the legendary sword.

NPC Avar Tar claims the Sword of Fury was his sword and he left it there before leaving to the mainland.

At the south of the premium side of Rookgaard there is a grave (here) that leads to a cave, the sign next to it says:

The cave under that grave leads to another cave, with skeletons, and a sign (here) next to a collapsed tunnel that says:

You read: Maze of fury

According to the world map of Tibia ML there's nothing below nor above the hole at the end of that collapsed tunnel.

Bozo is a Royal Jester from Thais and a known prankster. If asked about weapons he can sell you the Mace of the Fury (a simple and useless rolling pin).

When you ask Cipfried about his job, he says that he is just a humble monk. The sign by the island says that only the humble may touch the sword of fury. Also, the portal in the minotaur hell room is believed to be linked to the quest, and it has been shown to just lead back to the temple, where Cipfried is located.

During the Test Servers Gamemasters can interact more with the players and sometimes take them to places they could never get to. The well known Master Slayer of Antican's Rookgaard was teleported to the island of Sword of Fury.

Sometimes the sword will disappear from the island till server save and the fires on the surrounding rocks will die down. This is triggered without noticing it (which explains why people thought it was random).

Eclo on rook, a player from Antica, figured out how to make the Sword of Fury disappear from its place. He does not have the sword, however, and if he did, he would "never stop bragging about it." He proved he knows how to delete it by doing that on the 20th of January 2007 in 3 worlds, Harmonia, Luminera and finally Antica.


As far as we know, when this trick is performed, the sword will simply disappear from the island. Around the 7.7 update, through less-than-honest means that will not be further mentioned here, it was been proven beyond all reasonable doubt that the sword will not be teleported or recreated elsewhere.
Needless to say, there's nothing saying that CipSoft can't change their own quests like they did with the Femor Hills tower, although it's not very likely considering the sword would unbalance rook completely. 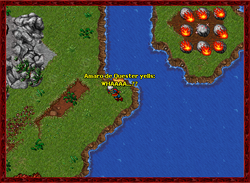 will be seen when Sword of Fury disappears.

Retrieved from "https://tibia.fandom.com/wiki/Sword_of_Fury?oldid=788412"
Community content is available under CC-BY-SA unless otherwise noted.