Appeared the first time with Summer Update 2008. He is a random spawn with no announcement. 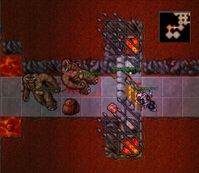 Stonecrackers Lair for Grizzly Adams Behemoth Task
Add a photo to this gallery
Click Here to Show/Hide Spoiler Information
Spoiler warning: Quest and/or game spoiling details follow. (Settings: hidden content)
Part of the Killing in the Name of... Quest. The portal which leads to the boss is upstairs in west tunnel of the deepest floor of Cyclopolis (here).
Spoiler ends here.

Stonecracker spawns near the stairs which lead to the Behemoth Quest room. It's also possible that it spawns after the level 30 door (as shown in the image) with 3 Behemoths. There were rumours at one time that it dropped Earthborn Titan Armor which appear to be false.

This boss behaves similar to a Behemoth, only with stronger attacks and the ability to heal itself.

Fairly easy for a level 80 knight to block.

Retrieved from "https://tibia.fandom.com/wiki/Stonecracker?oldid=832900"
Community content is available under CC-BY-SA unless otherwise noted.