A member of the Explorer Society tried to find out more about the Venore Amazon Camp and lost his way.

Note: Two separate quests listed are listed on this page, since they are very close to each other and have similar requirements. However, the spoiler will be in two parts. These quests are not complicated; the only difficulty is defeating the creatures that guard the rewards.

Travel through Green Claw Swamp to the Amazon Encampment, North of Venore.

"Witch Hill" is located near the center of the camp, here. 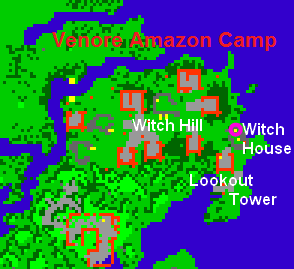 This quest is located under-ground east of "Witch Hill". To get there go downstairs the "Witch house" (purple mark). 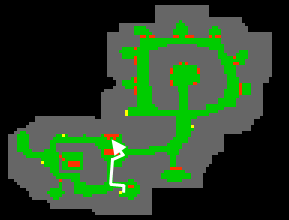 Follow the map of this basement in order to obtain your reward, it is guarded by a Witch and 3-5 Valkeries. Once they are defeated, open the chest to find a bag with 100gp, a Crystal Necklace, and 2 Black Pearls.

Retrieved from "https://tibia.fandom.com/wiki/Skull_of_Ratha_Quest?oldid=756266"
Community content is available under CC-BY-SA unless otherwise noted.