7.2
December 16, 2003
The Skull System is a system that was made to make sure that Player Killing wouldn't get out of control. The system exists only in Open PvP worlds. When a player attacks someone who is not skulled, he/she gets a white skull. If a player kills someone with a white, red, yellow, black or green skull they won't get skulled.

You can check your character's current Unjustified Points and other useful information regarding the Skull System by opening the corresponding widget in the Tibia 11 client.

A player will get white skull if they attack or kill another player. If they only attack, the skull will remain until the Logout Block is gone ( you will also receive a Protection Zone Block 'till logout block is gone, together with the White Skull ). However, if they kill another player, they will get white skull for 15 minutes, and every offense against other players during that time will reset the time, so player killers will have to wait another 15 minutes.


Killing a white skulled player is a justified kill. However, if you attack someone with a white skull, they will see a yellow skull on your character, and be able to defend themselves without punishment. If you finally kill a White Skull you will have to wait a minute to lose the Protection Zone Block.

A player gets a red skull if they kill:

A red skull will last for the 30 days following the last unjust kill over the allowed amount. If you pass the allowed limit again this will cause the one-month red skull penalty to start over. A red-skulled player who dies will drop all items, regardless of whether they have blessings or wear an Amulet of Loss! This will encourage players to hunt and to punish players who have a red skull.
The Twist of Fate blessing does not work for red-skulled characters, so when a red skull dies (even when it's during PvP!), they lose any regular blessings, but will keep Twist of Fate.

Excessive killing of non-skulled players or "innocents" is no longer a violation of the Tibia Rules since the summer update of 2009.

Black skulls will appear when a player kills double the amount of players needed to attain a red skull. This is used as a replacement of the old 30-day ban for "Excessive unjustified player killing.

A player gets a black skull if they kill:

When a player has a black skull they will no longer be able to attack an unmarked player - that is any player without a skull. In addition to this, a black-skulled player may not use area Attack Spells and Attack Runes (i.e. Hell's Core, Explosion, etc.), as well as Burst or Diamond Arrows to prevent black skulls from killing unmarked players indirectly. They also cannot summon or convince creatures, or use Undead Legion or strike spells (i.e. Energy Strike) which are not aimed at a target.

A player will receive a yellow skull if they attack someone marked with a black, red, white or revenge skull (orange). The attacker is yellow skulled only for his victim; this is done because even player killers have the right to defend themselves against other players that might try to kill them. Killing someone with a yellow skull will be a justified kill.

Yellow Skulls are special. If a player who has a black, red ,white or revenge skull is attacked by an unmarked player, the attacker will get a yellow skull which is visible only to the player he attacked. This allows even a black skull to kill in self-defense without receiving extra penalties.

If someone kills you, he receives a "Revenge Skull" (orange) for one week, so you can attack him in that week without obtaining a white skull, but you will receive a Protection Zone Block and a yellow skull for attacking an orange skull. Only you can see the revenge skull on your killer. An orange skull lasts either 7 days or until you took revenge and killed the character with the orange skull. If a character has killed you several times in the last 7 days, the orange skull lasts until you took revenge for every single of these kills. Once all those unjustified kills are avenged or older than 7 days, the orange skull vanishes. It was first seen during the Test Server client 8.63. 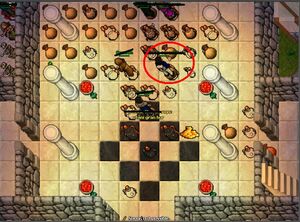 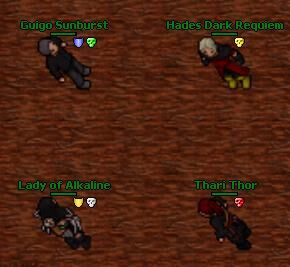 After the summer update of 2013 the green skull was removed from normal game worlds, due to the new PVP (player versus player) system. Furthermore players are now unable to attack members of their own party in Open Pvp Worlds. Although in PVPE(Hardcore Worlds) players still take damage from other members of their party, but are unable to actually "target" or "click" on the other members to attack them. They may only be damaged by area spells/runes.

Retrieved from "https://tibia.fandom.com/wiki/Skull_System?oldid=826802"
Community content is available under CC-BY-SA unless otherwise noted.