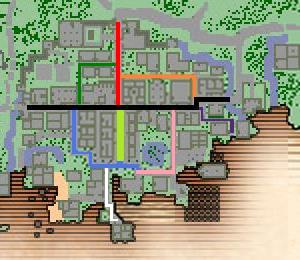 Sea Lane is in the south of Carlin. It only touches Magician's Alley to the north. It is near Central Plaza in central Carlin, and Harbour Lane to the northeast.

Buildings and NPCs from north to south on the street:

Retrieved from "https://tibia.fandom.com/wiki/Sea_Lane?oldid=790965"
Community content is available under CC-BY-SA unless otherwise noted.