You see a scarab

The Scarab is in general associated with buried secrets and wisdom, which made this beetle an important religious symbol for the city of Ankrahmun. Typically found in their underground lairs, they also inhabit sacred places such as temples or tombs. Scarabs protect their charge with ferocious intent. They will attack anyone who dares to intrude their area and will not relent until the threat is eliminated. Their shells are immensely hard and sometimes weapons might get caught in their chitinous armor. They are able to concentrate their poison in a deadly cloud of nauseating fumes that especially cover their retreat if overwhelmed.

There is a small chance killing a Scarab will spawn a Scorpion in its place, if Horestis has been recently killed during The Mummy's Curse World Change. When this happens, the message "Horestis' curse spawns a vengeful scorpion from the body!" will appear. 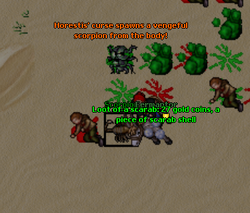 Scarab spawning after a scorpion is killed during Horestis' curse

Poison Field (under it self)
⁠,

Ankrahmun Tombs, the sand around Ankrahmun (use a shovel), deep in Larva caves, the path leading to Chor, beneath Fenrock, Lion's Rock.

Scarabs will push or kill weaker creatures in its path, like larvas.

Knights At around lvl 25 with skills 55/50 with healing when required.
Paladins At around lvl 20 With skills 55/45 these can be quite good exp as long as you're not cornered too often.
Mages might do better to avoid them because of the very poor Exp/HP Ratio, however could be a good and cheap option if mages hunt them with Wand of Inferno or Underworld Rod.

As of November 16, 2011, Scarabs as well as other poison-causing creatures can no longer be convinced. This was to prevent PvP abuse whereby a player would trick another player into convincing creatures that would later frag low level characters with poison applied earlier. After enough kills the player would obtain a Red Skull and would lose all items belonging to them upon being killed. More can be read in the news article "Content Fixes".