Generally, roleplaying (also abbreviated to RP) is the act of assuming personalities for different characters or situations, in order to give the game a more realistic atmosphere. For instance, a character can play the role of a dwarf, and start talking and acting like one. 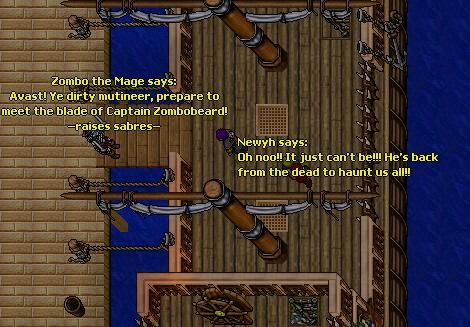 Roleplaying is art itself. It's attempting to write a book in real time. As in a book, roleplaying is not only based on talking, but also on personalities, actions, drama, protagonists and antagonists, and much more. Resuming, roleplaying is creating in details a whole new scenery where a story is taking place, and then proceeding with that story.

As we all know it, Tibia does not support character's actions, faces, or feelings. Of course, a good roleplaying consists not only of long speeches but also of actions, so it's crucial to say what a character is doing while they talk, in order to create the scene atmosphere. Usually, that is done by putting actions in parentheses or the like.

Nagatho Goldenflag: Oof, that was the strongest orc I've ever slain. (kneels and rests his sword)

Not only a role-playing game, Tibia is also a medieval game. Therefore, when roleplaying, you should always pay attention to the way you speak.

Haga Dellyn: But that would never be a challenge for the mighty Haga, no! I just used all my strength to climb that huge mountain. But, after stepping at the very top of it, I fainted and didn't wake up until the sun was long gone.

When roleplaying, what you should keep in mind is: roleplaying has nothing to do with Real Life!!! When you assume a character's personality, you must forget everything that's not related to the role. For instance, "logout" should not exist in a roleplayer's dictionary. Why? Because the character you are playing doesn't even know what "logout" is. All they know is that they live in a remote place called Tibia and that everything there, from creatures to magic, is real.

But what to do when refering to Real-Life is a must? Actually, there is one thing that can be done:

These two abbreviations are long known by roleplayers. They mean, respectively, "Out of character" and "Back in character". You can use them whenever you need to talk about real-life or other things that don't have anything to do with the role, or even exchange information between your role partners before proceeding with the role.

Geale Keale: This definitely was my best mug of beer ever. Guess I'll have to use the toilet. I'll be back to the table in a few heartbeats. (OOC: mama's calling me.. brb)

Geale Keale: (BIC) Aww, I just forgot there is no toilet in this tavern.. Guess i'll look for a nearby one...

Many reasons for roleplaying can be pointed out. From the slightest will to provide an "escape" from reality, to the will to make all your Tibia adventures more exciting, roleplaying can really become a pleasant activity. Afteralls, you can do almost anything you want, perform every personality you feel like, and also join this huge medieval atmosphere that makes our creativity flow like never before.

But we should never let roleplay become a reason for disagreements and fights, as roleplaying is a way of relaxing and enjoying the unlimited universe a single game makes us feel in.

Curious Thing by the Gods (Cipsoft) 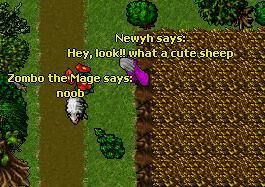 A grave under Mount Sternum, more precisely at the Graveyard of the Doomed expresses CIP's despair that the roleplaying aspect of Tibia is dead. It seems that people just want to powergame and level up, and not to experience the most of fun Tibia can provide us.

You see a grave. You read: Here lies the RPG-part of this game. We will miss you!

Retrieved from "https://tibia.fandom.com/wiki/Roleplaying?oldid=668045"
Community content is available under CC-BY-SA unless otherwise noted.