Active
The prey system gives you a bonus while hunting a certain creature for a certain amount of time. It was introduced with the Winter Update 2016 and first announced on October 27, 2016.[1]

With the Winter Update 2019 this system was expanded to include the Prey Hunting Tasks, which is similar (but independent to the Prey Creature system). In this system, players can kill predefined amounts of a creature selected in a fashion similar to the Prey Creature and receive Hunting Task Points (HTP) for that, which can in turn be exchanged for the Falconer Outfits, Antelope mount or other cosmetic items.

Players who reached the mainland can right-click on their character and choose "prey system" from a context menu, use the hotkey Ctrl+Y or the Prey widget

to open a window as shown in the screenshots further down this page. There are three prey slots:

From each of the prey slots you can choose one creature out of 9 creatures. 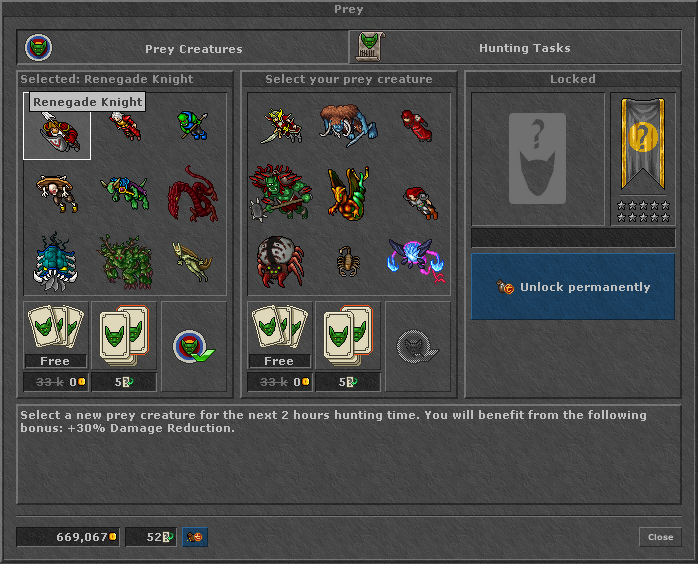 You will not find the same creature in different preys, so you cannot choose two or three different bonuses for one creature. If you don't want to hunt any of the 9 creatures presented to you, you have several options:

After you selected a creature and a bonus, a timer will run for 2 hours when hunting any creature, not just the one you selected to hunt. When the 2 hours are over the creature your selected will vanish from the prey slot and you can select another one. 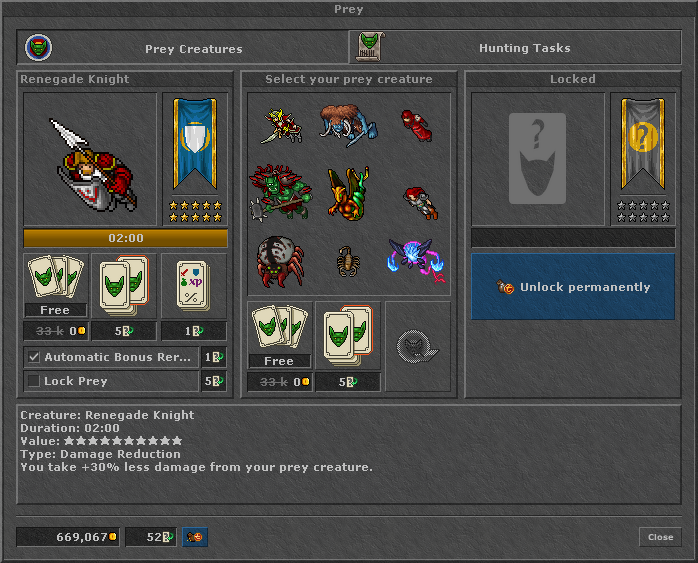 The moment you select a creature you also receive the bonus.

If you don't like the bonus you received you can do one of the following:

Each bonus has 10 steps and a wildcard will always improve your current step (up to the maximum) and may change your bonus type. If you are already at step 10 the bonus type is guaranteed to change with a wildcard.

The improved loot bonus works in the following manner. If you have an improved loot bonus with an effect of 15% this means there is a 15% chance that the monster will have another set of loot generated, basically it will behave as if you killed two monsters instead of one.

Prey Hunting Tasks are kill tasks which players can complete to earn Hunting Task Points (HTP). The point can in turn be exchanged for the Falconer Outfits, Antelope mount or other cosmetic items, as seen on the Rewards table below. The Hunting Tasks have the following characteristics:

The Prey Wildcards can also be used in the Hunting Tasks system for two things:

The amount of HTP received for a task depends on the creature's difficulty, the amount of creatures of the task and the reward level of the task. Higher rewards have a better HTP/Kill ratio, and harder creatures as well, since they of course take longer and consume more resources to kill. Due to the 1 task per slot per day limitation, the fastest way to get HTP is with Hard tasks of 800 creatures at reward level 5.

Chance to start with each Reward Level

The Hunting Task Points can be exchanged for different rewards with NPC Walter Jaeger in Thais. He can be found north-east of the temple.

It's possible to roughly estimate how long it takes to get the rewards on some scenarios (i.e completing a 800 kills task at reward level 5 every day).

The following achievements can be gained by completing Prey Hunting Tasks:

Several changes were made to Prey Hunting Tasks on September 15, 2020 in order to make it easier to get the rewards. In summary, the free daily list reroll and the 50% chance of jumping two reward levels were added and the prices of the rewards was reduced between 30 and 40%.