It's a Demon Lord - lesser of the Demon Overlord (which are yet to plague Tibia) but still dangerous. Whenever you think the world is safe and all the monsters have been killed, when you least expect it, Orshabaal surfaces. It is a Demon Lord who normally hides very deep down in the depths of The Edron Hero Cave. Its magical and physical powers are overwhelming! Many brave heroes have fallen by the great fireball and energy beam it utilizes. To make matters worse, it flees when it reaches red health, and if the adventurers are not fast enough in killing it, Orshabaal's vile healing magic will allow it to return to the fray. Whenever it chooses to raid a world it won't come alone, it brings a lot of Demons as company to help spread death and disaster. It drops the mighty Thunder Hammer. Even though Orshabaal has since lost his title of strongest monster, he remains the most infamous, due to his spawn location on the surface (the Triangle of Terror hide deep below the surface, and Ferumbras sits at the very top of his citadel). You are able to use Blessed Wooden Stake on his corpse as well as on all his summoned demon's corpses, in order to get Demon Dust. Sometimes Orshabaal gets trapped by his own Demons because he doesn't kill his summons like Scarabs kill Larvas. The quickest kill of this feisty monster was an astonishing 7 seconds on Lunara. 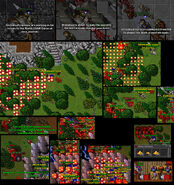 To all players on the world it appears, 3 messages are broadcasted in white text.
00:00:00 Orshabaal's minions are working on his return to the World. LEAVE Edron at once, mortals.
00:04:00 Orshabaal is about to make his way into the mortal realm. Run for your lives!
00:06:40 Orshabaal has been summoned from hell to plague the lands of mortals again.

North of Edron near the Dragon Lair in the stone circle (here).

Nowadays, Orshabaal will most likely die in a few seconds because of the high number of players who will be waiting for it. In such cases, the best strategy is try to position yourself around its spawn and attack it as soon as possible when it spawns. If he server is new, or if there are few players online, you may use the strategy that was for a long time the only way to kill this once-fearsome boss.

Lure it to the famous spot near the entrance of Cyclopolis. When it's at red health, shoot Magic Walls so it can't run away. The blocker should party mode with the shooters and get the loot ASAP after killing it. Since it's likely the blocker won't be able to heal quickly enough when Orshabaal performs a strong combo, it is advised to have at least a few mages using Ultimate Healing or Exura Sio on the blocker. A good strategy is luring the Orshabaal into a place that you can hold just it between 2 trees, or in a corridor where 1-2 Demons limit its movement, helping avoid the line-of-sight attacks. Also its possible to use a medium level char (or a low level) as bait to lure him in a place where he will get trapped by his summons, after that people can easily shoot and Orshabaal won't move until its near death.

Also, keep in mind that when the blocker is blocking Orshabaal, it will still tend to use Great Fireball and Great Energy Beam, so you may want to stand diagonal and quite a way back from it to avoid these attacks or you may experience a quick death.