Oramond is a continent which is located east of Cormaya and reachable by ship from Thais only. It has one major city, Rathleton and various hunting grounds. Although Krailos is technically part of Oramond, the name Oramond is commonly used only to refer to the southern part, excluding Krailos.

The Oramond boat captain, Gulliver, is on a small island just west of the main island. To get to the city of Rathleton you must use a Slime Slide. Stepping on this slide transports you to a hill on the main island; here there are minotaurs. Go down to the ground floor and walk east to some buildings and a small boat where a portal takes you across the water closer to the city. From this spot you can either walk north to the main gate, then west to the upper city ramp or climb the ladder to the dock, go down the ramp the other side and walk north to the upper city ramp, here.

Oramond and the city of Rathleton are divided into several subareas, as seen below: 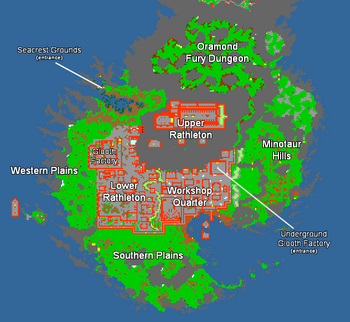