You see an ogre savage.

Most male ogres come in two varieties, brutes and savages. Their main task is to fight for the clan or to scout the steppe for something edible. Ogre savages favour fang-like weapons, like short swords made of stone, axes of crude iron or clubs carved out of animal horn. No less dangerous than the brutes, most ogre savages prefer weapons with an edge or blade over a club - the better to slice their enemy's belly or to bleed and weaken their fleeing prey. They love to mince their food, and taunt enemies with war cries that hint at the meashed meal the foe will be turned into. 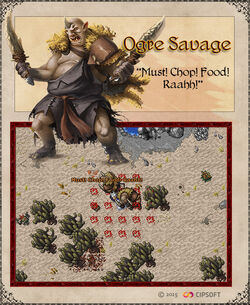 Simply kill it, make use of its weakness to Energy Damage.

Retrieved from "https://tibia.fandom.com/wiki/Ogre_Savage?oldid=832574"
Community content is available under CC-BY-SA unless otherwise noted.