You see an ogre brute.

Most male ogres come in two varieties, brutes and savages. Their main task is to fight for the clan or to scout the steppe for something edible. Ogre brutes specialise in hurling boulders and brute force, punching and crushing their enemy with their enormous body weight. Sometimes, however, they may also carry a single large club or heavy axe for emphasis. 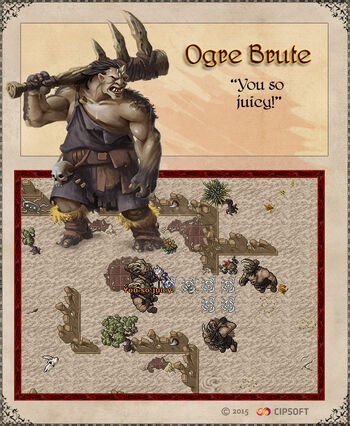 Ogre Brutes are fairly slow but have a very strong melee, and although they dont use the smoke exori or the distance fighting very often, it can combo its abilities dealing very heavy damage. Be on guard as it uses its paralyze ball and drunkness wave often. It is suggested to wear a dwarven ring if you are a low level mage or paladin. It is weak to Energy Damage, if you are a mage you can use energy type attacks.

Retrieved from "https://tibia.fandom.com/wiki/Ogre_Brute?oldid=800994"
Community content is available under CC-BY-SA unless otherwise noted.