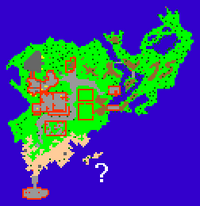 The first version of Nostalgia Island was introduced on 17 January 2012, the third day of the month-long celebration of Tibia's 15th Anniversary. The graphics on the island are mostly older versions from earlier times in Tibia's history. It is located here, west of Meluna and Travora, south of the Tutorial Island and north of Ramoa.

The island is comprised of a ship with captain Stone Temple Parrot, a graveyard, the Nostalgia Island Museum, two wheat fields, a mill, a "Under Construction" fenced-off area with modern graphics and a small mountain.

Connected to Nostalgia is Tibia Spirit Island. This small island has something special. If you minimize your minimap and look at it you will notice that it has the shape of a "spirit" with hands up, a happy face and a big number 15 on it.

Just like older times in Tibia, not all tiles were coded correctly so some of which you would not expect it are Protection Zones and some places do not have a PZ like you would expect (1sqm in the museum). There are also squares that appear to be grass, but are water on the map and not walkable. 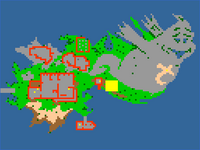 The second version of Nostalgia was implemented on 7 January 2017 as part of Tibia's 20th Anniversary. The same graphics are still used, but this incarnation of the island is located here, northeast of the continent of Zao and north of Gray Island. It can only be reached by walking across the bridge from Vigintia to the west.

Its three main features are the museum, the graveyard, and the all-new Nostalgia Arena. The NPCs Dino, Red Robert, and Excited Tibian can be found within the latter.

It is also connected to a new version of the Tibia Spirit Island, which now looks like an ordinary ghost with a lower-case 't' on its ectoplasmic belly.

On January 7th 2019 it was re-introduced as part of the yearly Tibia Anniversary. identical to it's Second Iteration.

Note: it is possible for creatures to walk up or be pushed up ramps on the island.

In the Nostalgia Island Museum you can see the sprites and attributes of items from the past. The exhibition is located here.

Retrieved from "https://tibia.fandom.com/wiki/Nostalgia?oldid=765277"
Community content is available under CC-BY-SA unless otherwise noted.