View source
watch 04:21
Wiki Targeted (Games)
Do you like this video?
Play Sound

It has been suggested that this article be merged with The Shattered Isles Quest. (Discuss)

Now go to Raymond Striker and ask for a new mission. He will explain you that the pirates have some deals with the alchemist Sandra, in Edron. They are buying a dangerous substance there called Fafnar's Fire. Raymond sends you to talk with her pretending to be the dealer sent by the pirates. Go and tell her: "Hello / Fafnar's Fire / Yes / Your continued existence is payment enough". By doing this, Sandra will be enraged and will cut any deals with pirates. Report back to Raymond Striker

After this you can get access to Nargor, all you got to do is accept one of the following missions that take place there, and Sebastian will bring you there.

Note: You can start both this and mission 2 at the same time to save both time and travel money

In the way you will face some Pirate Marauders, Pirate Cutthroats and Smugglers. Go down and go through the door, kill the Thornback Tortoise here and open the Tortoise's Nest. Now report to Duncan and give him his Tortoise Egg from Nargor. 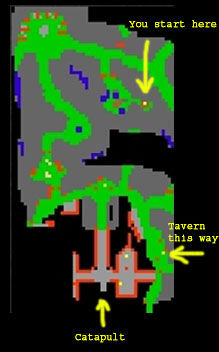 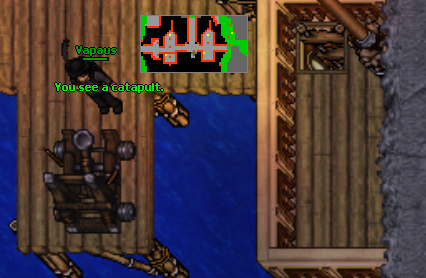 You will meet Pirate Marauders, Pirate Cutthroats and Smugglers on the way. Use your Fire Bug on the top left corner of the catapult and you will see a small explosion. Your job here is done and you should head back to Raymond Striker. After finishing this mission, your reputation in Sabrehaven will change to Cordial. The same Fire Bug can be used more than once.

Raymond Striker is pleased with your acts toward him and the people of Sabrehaven. In his third mission, you are instructed to infiltrate the tavern on Nargor, and study 3 Plans in which the pirates on Nargor have their raid plans laid out. However, in order to infiltrate their tavern you will need a full Pirate Set.

Once you have finally got the set, head to the tavern which is located inside the mountain. Follow the image above and go up the stairs marked at the bottom right side of it.

On the first floor it's recommended to use Levitate on the wall just east of the stairs you just came from, or using some boxes that you can find underground.

On the second floor, you will face a Pirate Buccaneer and 2 or 3 Pirate Cutthroat. You can just bypass them, but beware lots of pirates on the upper floor, including Corsairs.

On the third floor use some GFBs and go west to meet Vulterose.

Vulturenose is just outside the tavern. Speak to him while wearing the pirate set. Say "enter" and he will let you through the door.

Once you head up the stairs, chances are you will be surrounded by pirates. Avoid killing them, rather force them to run away, as you will have to return here twice more in a short period of time before completing the quest. The bar is quite a large room, and in it are 3 items that look like Treasure Maps, these are the Plans you are after. Just use them (Ctrl + Click) and you will study them. 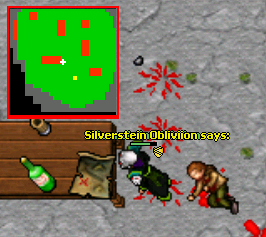 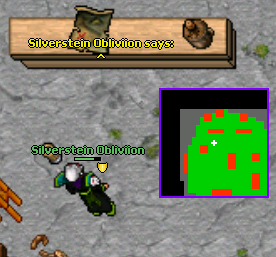 Once you have studied all of the Plans, return to Meriana.

In Meriana again, Striker will give you his lucky pillow, and will tell you to deliver it to Klaus. Once again (for the last time, finally) go to the tavern and deliver the pillow to Klaus. He will, then, assume that Raymond Striker is dead, and will throw a big party for the pirates.

Return to Sabrehaven, and talk to Captain Striker, he will tell you how grateful he is, and will give you a Model Ship, since he doesn't have any real ships left to give. Also, he asks you to remember him at anytime about the pirate outfit, so he can give it to you.

Now you can follow the Pirate Outfits Quest for the addons as well as ask Raymond for his Killing in the Name of... Quest task of killing 3,000 pirates with one of the pirate bosses at the end.

Before wearing the pirate equipment:

After you've worn the pirate equipment:

Go inside and use the three maps