Wandering the streets of Ankrahmun (usually somewhere east of depot)

Melchior was blinded by the Efreet because of his greed. He's the reason you cannot form an alliance with both races of Djinn. He has a great story to tell (see his transcripts).
He has a large walking area, but he will never leave the area shaded in the picture: 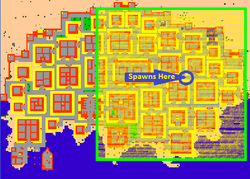 Retrieved from "https://tibia.fandom.com/wiki/Melchior?oldid=765872"
Community content is available under CC-BY-SA unless otherwise noted.