Man in the Cave

Man in the Cave

You see man in the cave.

The 3-4 monks he spawns with are not summoned, so be careful. When this creature is spawned, you may notice that there are far more Ice Golems than usual in the cave below him. You may be roped up the moment you step on the square below the hole in his room. You must walk around here if you want to get roped. Once roped a message will appear:
You have been roped up!.

The Man in the Cave was started from a post on the Tibia Forums in August 2006 by a player on Luminera named Frack'Heart (now deleted). Apparently Frack'Heart was complaining about a player in the Kazordoon Dwarf Mines who was roping creatures. His English skills were far from advanced, therefore the post was hard to understand.

He is also the only creature known to drop the Fur Cap. 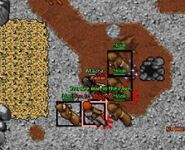 Man in the Cave on Antica

Man in the cave on Unitera 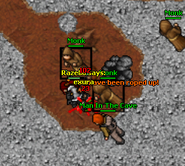 Man in the Cave on Refugia

You can hear the monks if you're standing exactly under his room.

Kill him fast. He is a lot weaker than his summons.

The monster was a CipSoft tribute to a Lumineran player called Frack'Heart (now deleted) who posted a thread trying to warn all sorcerers and druids that he was hunting in the dwarf mines and something "roped his monk summoned". Since Frack'Heart's English was so bad, people got confused, missinformed and just flamed him.

The Tibia.com Featured Article of April, 2016, was about the myth of the Man in the Cave. You can read the article here.

Discovery of Man in the Cave

Reports by Chaotic Sorcerer on Luminera said that he spawns in the Svargrond Mines and that he only found the spawn by chance. Chaotic was just exploring formorgar glacier with a friend when suddenly he saw the orange text. "You have been roped"... 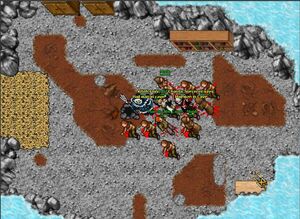