If you want to make a lootbag, it is advised to bring a Parcel and a Label to mail it in the Royal Mailbox in the Teleportation Hub. Furthermore a Helmet of the Deep can be brought to block some attacks from Water Elementals. Also don't forget to take one or more of the Killing in the Name of... Quest hunting tasks, if you're going to hunt on Malada.

Under the island of Malada is a series of passages which intertwine in a large underground labyrinth (also famous Quara Hell). These passages are mostly occupied by Quara Scouts, but the occasional Hydra or Water Elemental can be seen.

A hole to the southeast of the island is the only connection to the dreaded island of Kharos where Ferumbras lies in wait in his citadel.

On the surface, approximately the following amounts of creatures can be found: 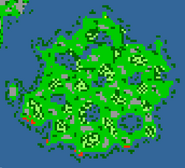 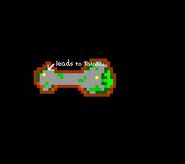 Malada -3 ground level
Add a photo to this gallery
Retrieved from "https://tibia.fandom.com/wiki/Malada?oldid=748670"
Community content is available under CC-BY-SA unless otherwise noted.